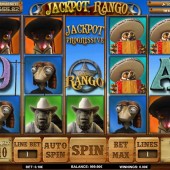 Every once in a while there is an animated movie that captures the imaginations of kids and adults alike. In 2011, Rango, starring Johnny Depp as the eponymous hero, hit cinemas and received favourable reviews. Given that slots developer iSoftBet had sealed a licensing deal with Paramount Pictures, it made sense for the developer to take Rango and turn it into a branded slot.

Jackpot Rango is a 5 reel, 25 payline slot that stays very true to the essence of the movie adding a touch of magic here and there. All of the central characters make an appearance on the reels including Rango himself, Rattlesnake Jake, Mayor John, Beans, Priscilla, and one member of the burrowing owl Mariachi band. The remaining symbols include the regular 9-through-to-Ace symbols.

Rattlesnake Jake takes on the role of the Wild on this slot. He replaces any symbol across the reels, except for the Scatters and Jackpot Progressive symbols, in order to complete any potential winning combinations that might appear across the reels.

Trigger 10 Free Spins with up to an 8x Multiplier

If you hit two Rango symbols on the first reel then this will trigger the Rango Free Spins Bonus where for the duration of the free spins bonus round all Rango and Wild symbols are held in their positions giving an increased possibility of hitting big wins.

Jackpot Rango is a slot that surprised me. It didn't appear to have much going for it. Granted, there is the progressive jackpot but we all know the chances of triggering those bad boys are slim to none. The free spins provided a decent return but I had really hoped for more from a slot that was based on a movie that did reasonably well. It is a shame because iSoftBet have proven what they can do with branded slots including the 90s-themed Beverley Hills 90210 slot and the dark Hansel & Gretel – Witch Hunters slot. This slightly missed the mark though.