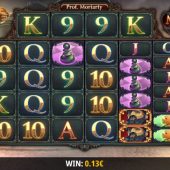 Moriarty Megaways slot by iSoftBet is the third in their Twisted Tale series. The first was the excellent Morgana Megaways slot which was followed by the Queen of Wonderland Megaways game and these both differed significantly from their first effort, Aztec Gold Megaways. Here we get classical music to set the mood with the inevitable Victorain London background and Conan Doyle would recognize all the symbols here if he was about today. So will Moriarty be the villain for our bankroll here or not?

Pretty standard stuff to begin with as we have 6 reels of 2-7 rows each with a scrolling row of 4 symbols above the middle reels where the Gold Watch Wilds can only appear. The other pays on Moriarty Megaways slot are the same as Bonanza, with Moriarty paying 50x bet for 6-of-a-kind, Ring 7.5x, King or Pawn Chess Pieces 2x and six card values of 1.75 down to 0.8x. The winning symbols are replaced from above and can appear stacked, with Free Spins scatters on all reels. No modifiers so on to the exciting bonus!

You need 3 scatters for 15 free spins with an increasing multiplier. You get +5 for each scatter over 3, maximum 30. You will notice now the reels are smaller as you have Watson under the left and Holmes under the right. They each have a counter set at 3 next to them. On the top scrolling reel you now have these two characters appearing, as well as scatters of which you need 3 or 4 for 5 or 10 extra spins. When their respective meters reach 0 via accumulating 3 of their symbol on the scrolling bar, you get a special modifier.
Watson - a grid opens bottom left and gives you a guaranteed win via Mystery Pipe symbols and this will add 1x to the multiplier too, more if it keeps tumbling wins in.
Holmes - a grid opens on the bottom right and gives the maximum 117649-ways and a win, which will also add 1x and again for any resulting tumbles.
You can trigger both of these on the same spins and they will play out in order from left-to-right. It's possible they could both trigger on a full Megaways spin of 117649-ways and then each produce maximum ways themselves - this is why iSoftBet tell us that up to 352,947-ways are possible.

Moriarty Megaways slot is pretty darned good in my opinion. You don't tend to hit big in the base game due to the lack of modifiers but it's easy to play, nice to watch and listen to. The free games can pay very big amounts, easily into 5-figures times your bet and it's always good building up the multiplier then triggering the Holmes modifier and seeing if that brings pay dirt to you, as that seems where the mega hits are most likely to occur. The Watson one doesn't do as well on average but can do on rare occasions. I am certainly going to be taking another cab to 222b Baker Street in the future...