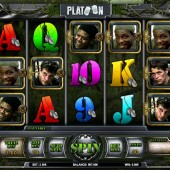 In 1986, American director Oliver Stone released a movie that was seen as a biopic of his own experiences as a soldier in the Vietnam War. The film went on to win four Oscars and has gone down in history as one of the most brutally honest portrayals of war. Slots developer iSoftBet decided that this popular 80's classic was due a slot game in its honour and agreed a licensing deal with Metro-Goldwyn Mayer Studios Inc.

War Is Hell...
Platoon is a 5 reel, 30 payline slot that immediately exposes you to the horrific atmosphere of the movie with the reels set against the dark environment of the Vietnamese jungle with a religious statue to the left and a silhouette of a gun-wielding US soldier on the right. Was this an intentional move by iSoftBet to show the contrast of the Vietnam War or was it coincidental?

No Johnny Depp?!
The symbols on the reels include some of the better-known characters from the film. Chris Taylor (Charlie Sheen), Sergeant Bob Barnes (Tom Berenger), Sergeant Elias Grodin (Willem Defoe), King (Keith David), and Big Harold (Forest Whitaker) are present on the reels plus the regular 9-through-to-Ace symbols.

There's "Walking Wilds"!
The Wild symbol is included on the reels in the form of a cartoon tank. It would have been more realistic if it was a real tank as opposed to a cartoon tank but perhaps I am picking. It acts as a substitute for all other symbols, except for the Bonus symbols, to complete potential winning combinations. Any payline win that includes a Wild will trigger a 3x multiplier and a re-spin where any Wilds present on the screen will move left by one reel. The re-spins will continue until all Wilds have exited the reels to the left. This is similar to the Walking Wilds that are included in The Invisible Man slot from IGT.

Our View...
Platoon is a movie of epic proportions and in many respects the slot does do the film justice. The Walking Wilds-style feature is a neat little inclusion and adds some action into the base game and it's always good to see a free spins bonus round. However, there is so much more iSoftBet could have included in this slot with bonus features relating to the characters that played such a key role in making the film the success it was. You only need to look at Microgaming's Jurassic Park slot to see how a branded slot is made. Still, this is a very cool slot in its own right so don't be put off by the little nit picking of what is a solid title.