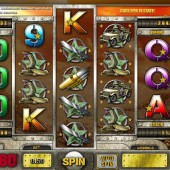 Rambo has gone down as one of the greatest Hollywood action heroes in the history of film. The soldier of war, John Rambo, who was played by Sylvester Stallone, was originally released in 1982 with the first instalment of the franchise called First Blood. This was followed by Rambo – First Blood Part II and Rambo III before the series returned in 2008 with its fourth instalment called Rambo. This is the movie that slots creators iSoftBet decided to base their Rambo branded slot on.

Rambo is a 5 reel, 720 ways to win slot that puts you in the heat of battle with Rambo himself. If you love your military-themed slots then you've come to the right place with all sorts of army paraphernalia littered across the reels.

There are a number of symbols on the reels including an army Jeep, cobra, machete, bullets, and the regular 9-through-to-Ace icons with each of those symbols possessing at least one army star on them to symbolise their importance in a similar way that stars equate to ranks within the army.

Get Wild with Rambo

The Wild symbol is present on the reels as the Rambo Wild. It basically substitutes for all other symbols, except the Scatters and the Progressive Bonus symbols, to complete any potential winning combinations across the reels.

Trigger up to 15 Free Spins with a 15x Multiplier

Four Progressive Jackpots Up For Grabs!

It is one of the most recognisable brands in cinematic history and iSoftBet are the main developer when it comes to branded slots so theoretically this was a match made in heaven. As a stand alone slot, this Rambo slot exceeded my expectations. The free spins are surprisingly fun and the four different progressive jackpots give you something to keep an extra eye out for on every spin. I came close to the mini Stealth Jackpot a couple of times so imagine the Explosive Jackpot is tricky to trigger but it's all great for a laugh without the progressive wins. The vibe of Rambo is here and the entertainment value is superb as well. Great job, iSoftBet. On a par with their brilliant Basic Instinct slot. Why did Playtech have to get the Rocky slot?!