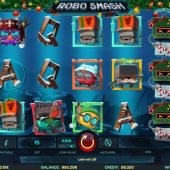 Robo Smash slot is a strange affair in that somehow iSoftBet have managed to cross-theme Christmas and Robots in the same game! It is quite a strange feeling to be spinning Robot symbols about and hearing soothing Christmas music over the top... However, I am for ever going on about the lack of imagination in modern slots, so they are already off to a good start in my opinion.

There are various colour Robots on this 15-line 5 reel slot, and the top-paying one offers a decent 33.3x stake for 5-of-a-kind down to the lowest of the A, K Q card symbols, the 10, which pays a mere 1.66x stake for the 5. The symbols all appear across the reels in stacks of 2, 3 or singly. There are Wilds only on reels 1 and 5 and these are single but will expand to cover the whole reel IF they land in the centre position. This becomes important when we view the bonus game...

Should you land the Purple Wild Robot on reel 1 in the centre at the same time you land the Green Robot Wild in the centre of reel 5 both will expand as per normal but this event will also trigger a Robot Battle. Any wins will be paid then you will get a series of 5 free games. The first will spin the centre 3 reels with the Wild reels 1 and 5 held. The second spin sees the Robot Wild reels move to cover reels 2 and 4 and any wins are doubled. The third spin has them meet on reel three where they battle, turn to skulls and then reels 1, 2, 4 and 5 spin and any wins are awarded a 3x multiplier. The fourth spin is the same as the second with them on reels 2 and 4 and the final fifth spin sees them opposite where they started on reels 1 and 5. Eagle-eyed players will notice that this feature is similar to the random Wild reels in-play on Netent's Guns N Roses slot.

Robo Smash slot is slightly odd, but at least it's original. With a RTP of over 95% and a good feature frequency it's quite entertaining but some may find the frequent small wins tedious. There is potential in the Bonus Battle for hits of hundreds times your stake but I doubt the cheerful Christmas music will be accompanied by any pricey presents. I may forget to put the batteries in this Robot..