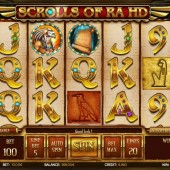 There are so many Egyptian-themed slots on the market these days with roughly the same names that it is almost impossible to distinguish them all apart from one another. Thankfully, the developers at iSoftBet have felt that the market needs another one to add into the mix so have released this Scrolls of Ra HD slot.

Scrolls of Ra HD is a 5 reel, 20 payline slot that follows all the rules of your average Egyptian-themed slots title. It has the word “Ra” in the title, it is set against the backdrop of an Ancient Egyptian temple, it has the generic Egyptian-themed music, and the reels are rammed with your standard Egyptian symbols.

The symbols on the reels include the green Ankh symbol, the yellow woman, the red Horus, the orange sun, and the regular 9-through-to-Ace symbols that are decorated in gold and Ancient Egyptian jewellery.

The Eye of Horus Triggers 5 Free Spins with Wild Reels

The Wild is represented by the Eye of Horus symbol. This has the power to substitute for all other symbols, except for the Scatter and Bonus symbols, to complete any possible winning combinations that are on the reels. If it appears on reels 2, 3, or 4 then the entire reel will turn Wild and you will be rewarded with 5 free spins with the reel remaining completely Wild for those spins.

There is a Scatter symbol, represented by the Scrolls of Ra HD logo, on this slot but they do not trigger any bonus features which is unusual for an iSoftBet title. Instead, they can pay out large Scatter winnings. If you hit five of them across the reels you can win 2,500 coins.

The Ra Bonus symbol is present on the reels in the form of the God Ra icon. If you hit three or more of these symbols across the reels it will trigger the Ra Bonus feature. Once triggered, you will be taken to a second screen where you must choose one from a selection of treasure chests to reveal an instant prize.

Trigger up to 10,000 Coins in the Scrolls Bonus

Scrolls of Ra HD feels like iSoftBet were told to fill a certain quota for Egyptian-themed slots. In all fairness, they've done a decent job. This slot has it all. In fact, you could argue there is a bit too much going on. Big wins can be had, free spins can be won, and a lot of fun is added to the mix. Is it in the same league as Novomatic's Book of Ra Deluxe slot or IGT's epic Cleopatra? That still remains to be seen but it has all the ingredients to be a popular slot for a long time.