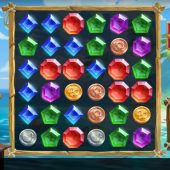 Sea of Riches slot by iSoftbet is a rare excursion into the world of grid cascade games for this developer. A pretty predictable cartoon Caribbean sea background greets us here with the prerequisite classical sea shanty tune and various pirate sound effects as we play. The set up is not dissimilar to most grid games like Play'n Go's Gemix slot or far more modern, Reactoonz 2 slot. There have been some pretty dire pirate games in the last year, most notably Red Tiger's dreadful Piggy Pirates slot, so I am apprehensive here! Can our bankroll sail back with the treasure or will it be made to walk the plank here?

We need cluster of adjacent tiles of 5+ symbols to get paid here on the 6x6 grid of Sea of Riches slot. The maximum pays are for 15+ clusters, so let's get those out of the way in a highest-low figure: Red Gem 150x bet/1x bet, Purple 100/1x, Green 50/1x, Blue 40/1x with five coin colours paying from 30/0.5x Gold and the remaining four 20/0.1x down to 3.75/0.1x. You can get Wild tiles and to this end we have a Wild modifier for each of the 4 levels. You rise through these levels by collecting Message in a Bottle tiles. There is also a Compass to fill to trigger other modifiers with every 24 tiles used in the same spin. This is because all winning clusters are removed and replaced with new tiles from above.

Rolling Rum - 1 to 3 barrels appear and each transform 3 to 6 vertical tiles into the same symbol.
Musket Shot - 5 to 12 tiles are shot away to be replaced by new ones.
Cannon Blast - 1 to 3 cannon balls fired on to the grid, each removing a whole row of symbols.
Swarm o' Parrots - a swarm of parrots attacks the reels removing from 10 to 15 tiles.

Once you charge the Compass with 48 or more tiles in one spin, you see a wheel. This awards 8 to 15 free games with random lightning which strikes the Compass to award a win level multiplier of 1,2,5 or 10x and can happen up to 3 times in one free spin. It resets before the next spin. Naturally you still get the modifiers above for 24+ symbols in a spin and it's possible to get the random Wild modifiers too.

Sea of Riches slot is quite a good cluster pays game with a far better base game than its Swedish counterparts like Moon Princess and Reactoonz in my opinion. The RTP is 96.11% and the maximum win is only half of those games at around 2400x bet, but you get some good entertainment in the base game via always seeming to get at least 2 modifiers when the 24 tiles is reached on the Compass. Free games are hard to trigger, rather frustratingly, as the Compass modifiers reset the Compass to 24 each time one is used and it's hard to get +24 tiles from a single modifier. When you do, the free falls are seldom disappointing and well worth the wait. If you consider the potential is half of that in those games mentioned, when have you ever seen those pay even half that 5000x boast? Exactly. I say you're better off here sailing these waters...