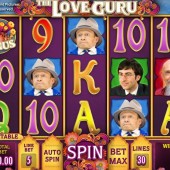 The Love Guru has gone down as arguably one of the biggest flops in cinematic history after its 2008 release. It might not have bombed as badly as John Carter or Gigli but its 3.8/10 rating on movie database website IMDB suggests that it is fairly horrific to watch. So it does beg questions that innovative slots developer iSoftBet decided it would be a good idea to launch a slot title based on this God forsaken movie.

All The Stars Are Here... Or Not...
This is a 5 reel, 30 payline slot that has you fearing the worst before you even started. This was a risky enough punt as it was but when you load the game up and realise that none of the main stars from the movie are even on this slot, those fears become realised. Do not expect to see Mike Myers and his Guru Pitka character. Justin Timberlake, Jessica Alba, and Kanye West all appeared in the movie but none of them are here.

Hooray! It's the B-Team!
Instead, we have a list of symbols that consist of Sir Ben Kingsley's Guru Tugginmypudha, Verne Troyer's Coach Punch Cherkov, Romany Malco's Darren Roanake, and they have even wheeled out comedian John Oliver's Dick Pants. It actually feels like Paramount Pictures have sent out the “B Team” for this slot. Maybe all of the A-listers (not that Sir Ben isn't an A-lister!) just wanted to distance themselves from this tragedy! There is a symbol that has the Guru Pitka print on it... but no Guru Pitka image. The regular 9-through-to-Ace symbols fill up the remaining positions on the reels.

Watch for the Wilds
The Wild is represented by the Indian elephant. It substitutes for all of the other symbols on the reels, except for the Free Spins Bonus symbol and the Love Guru Bonus symbol, to complete any potential winning combinations on the reels.

Hit Some Instant Wins
If you hit three or more Love Guru Bonus symbols on the reels then you will trigger the Instant Bonus. This will deliver an instant win payout for you and adds a little bit of an edge to every spin during the base game.

Our View...
The Love Guru was an awful movie but, fortunately, it is not half as bad as a slot game. It is a shame we don't get to see the hilarious Mike Myers or the beautiful Jessica Alba but this game has enough to keep you from dwelling on that. The Wilds and their influence during the free spins makes this slot worth playing on its own. The instant wins could be bigger but it's satisfying enough to hit a win on the reels on any base game spin. The fact you can also win up to 15,000 coins ensures you have something worth playing for. I would still say that high-octane 24 slot or the creepy Basic Instinct slot from iSoftBet are more enjoyable but if you fancy something a little more low key then this could be perfect for you.