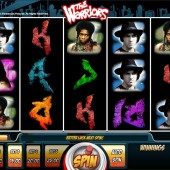 The 1979 cult movie The Warriors depicted the story of a New York City gang that is falsely accused of the murder of a charismatic gang leader who is preaching for gang peace and unity. The film then follows the gang as they attempt to avoid retribution from rival gangs and must make their way across the city at night averting all kinds of dangers. If you're too young to remember the movie's release then Eminem and D12 recreated the tale for their music video for the song Fight Music. Now, renowned branded slots developer iSoftBet has launched a slots title based on the movie.

Can You Dig It?

The Warriors is a 5 reel, 243 ways to win slot that adapts the movie authentically onto the reels. The symbols on the reels include characters from the movie including Swan, Mercy, Cowboy, and Cochise. There are also the regular 10-through-to-Ace symbols represented in a graffiti print. You can also hear the sounds of the city in the background to add some atmosphere to the reels.

Get Wild with Swan and Mercy

The Wild symbol is represented by a Swan and Mercy symbol. It substitutes for all other symbols across the reels, except for the Bonus symbols, to complete winning combinations. It also appears only on reels 2 to 5. All wins achieved through Wilds are subjected to a 2x multiplier.

Earn up to 50 Free Spins with a 5x Multiplier

There is a Bonus symbol on this slot and it triggers the bonus feature if you hit three of them on reels 1, 3, and 5 simultaneously on the same spin. Once triggered, you can win up to 50 free spins with a 5x multiplier awarded on any wins achieved during the free spins. During the free spins, all high paying, medium paying, or normal paying symbols stack up.

Unfortunately, that is your lot with The Warriors. I was personally a huge fan of this movie so my excitement boiled over when I saw iSoftBet were developing it as a slot thanks to their licensing agreement with Paramount Pictures. It is far from a bad slot. The free spins and multipliers you can earn make it worth playing on their own but it does lack a bit of depth. Introducing some rival gang-related bonus features would have been cool. Still, it might not be as fun as the darker Hansel & Gretel – Witch Hunters slot but it has a certain level of appeal.