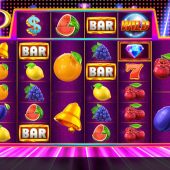 Triple Fruit Deluxe Megaways slot by iSoftBet is not in their Twisted Tale series. That's because of the theme but it is actually a clone of one that is - Moriarty Megaways slot. That game and the Queen of Wonderland Megaways slot alongside the exciting feature of Morgana Megaways offered some innovative features for the MW genre. Here we simply get a colourful background and retro symbols on the reels along with some funky music to listen to as we spin. So can we get close to tripling our bankroll or will the fruit not be low hanging around here?

On the reels...
To begin with we have 6 reels of 2-7 rows each on Triple Fruit Deluxe Megaways slot with a scrolling row of 4 symbols above the centre 4 columns where any Glitter Ball Wilds will appear. The 6-of-a-kind pays are Dollar Sign 10x bet, 7's 2.5x, Bar 1x, Bell 0.75x, Melon or Plum 0.5x with Grape, Orange, Lemon and Cherry 0.2 down to 0.1x. Symbols can appear stacked with winning tiles replaced in tumbles from above and there's scatters on all reels in the form of Diamonds. The modifiers are Max Megaways or Mega Mystery symbols which can appear on any spin, and you get the top scroll filled with them when they do!

Free Games
You need 3 diamonds for 15 free spins with a 1x increasing multiplier for each winning tumble. You can get +5 for each scatter over the 3, maximum 30 for all 6 scatters. The reels are now smaller as there is a Red Star counter under the left and Blue Star counter under the right both of which are set at 3. On the top scroll only you can now see these Stars appearing, also the Diamond scatters for which 3 or 4 awards 5 or 10 extra spins. If either of the Star meters go down 0 after collecting 3 of them you are awarded their enhancement and neither costs you one of your remaining free spins:
Red Star - a game appears bottom left and the Mystery Question Mark symbols will fill the top row guaranteeing a win. This adds 1x to the round multiplier too, even more if you get more winning combinations after.
Blue Star - a game appears bottom right and gives the maximum 117649-ways and guaranteed win, again adding 1x and more for any resulting tumbles.
It's possible to trigger both of these on the same spin, if so they play Mystery then Megaways. It's possible they could both trigger on a full Megaways free spin, then each producing maximum ways themselves - if so, up to 352,947-ways are possible.

Our View...
Triple Fruit Deluxe Megaways slot has a 96% RTP and is naturally as good as Moriarty is, being the same! Big base game hits will inevitably be via modifiers and it's pleasant enough to play, watch and hear for longer periods. The free spins aren't as common in frequency here as on other iSoftBet MW games but tend to pay well and you will be very unlucky not to earn at least 1-2 modifiers via the Stars. We have a 50,000x stake maximum win cap and as the Max Megaways takes quite a few spins to get 3 Stars for, by the time it comes, if it comes, you could have a big multiplier and so hit a colossal amount if fortunate. This game could get very fruity indeed...