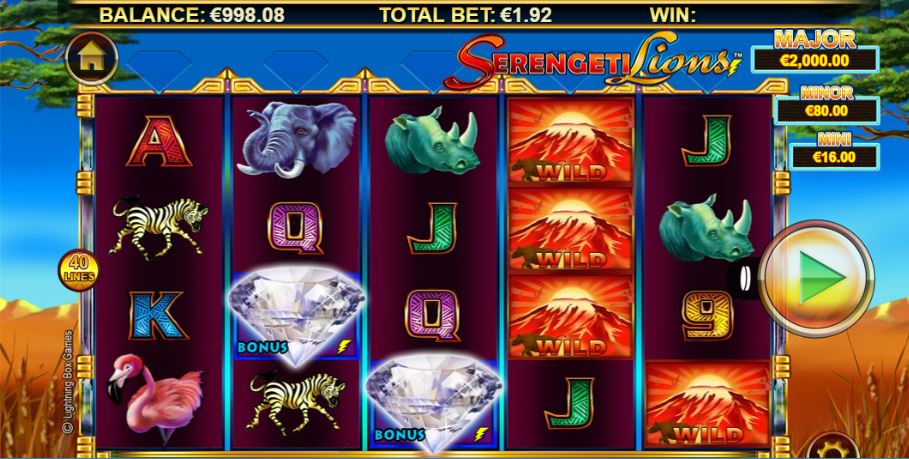 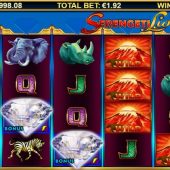 Serengeti Lions slot instantly struck me with the spectacular graphics and appearance although this is quite usual from this Australian developer, whose games are establishing a presence in an increasing number of online casinos. Lightning box specialize in wildlife themes and do it well, as you may have seen with Silver Lion and Redroo and there was also a sister game to this one, Serengeti Diamonds. The reels are set as you'd expect against a backdrop of the African bush in the Serengeti National Park and we see the various wildlife and have the tribal music as we spin. Be careful of the predatory Lion though - will he hunt down and eat your bankroll?

On the reels...
As with most Lightning Box slots you will see 5 reels of 4 rows each with 40 pay lines. You need to be paying 48 coins though as the Stellar Jackpots are present here and they are not progressives but rather internal ones of mini, minor and major.

You will notice little blue spaceships on the border between the reels in the centre that occasionally appear. You need all 3 to trigger this feature and will be taken to a spectacular cosmic scene and get 6 levels to progress through. You have three picks and are faced with screens of stars, asteroids and planets and will reveal a Red X which loses a life, a green 'Up Level' arrow or a cash award (both of which advance up the levels). If you have selected the right targets to be zapped by your space weaponry and reach level 6, not only will you have accumulated a decent cash amount but will get a final picks screen which you continue selecting until 3 of the mini, minor or major icons are revealed. This is quite a fun and spectacular game whatever the end result!

Back to the world of symbols, which all appear in stacks you have a Wild which offers us 125x the basic 40 coins for 5-of-a-kind followed by the Lion at 5x, Elephant and Rhino at 2.5x Zebra and Flamingo at 2x with card values at 1 and 1.5x bet for all 5. So a roaring 5000x bet is achievable if you had a freakish win of full-screen Wilds!

Diamond bonus
The free games trigger is rather odd here but good fun - as with slots such as Raging Rhino you need those Diamonds but here all 5 reels. Don't despair though, as when you land two or more consecutively from reel 1 you get 3 re-spins with the Diamond reels locked. Any Diamond appearing on the spinning reels will then lock and reset the re-spins to 3 at the end of which you hopefully have 5 locked reels. Then the bonus commences.

This is quite novel too as you get to pick from a screen of Diamonds, the first offering a quantity of free games which can be either 5, 8 or 10. The second pick is your multiplier which can be 3x, 5x or 8x. If you're not happy you can reject this and pick another quantity and multiplier which is your final offer. It was here that I imagined the 5000x for a full screen of Wilds multiplied by 8 for an incredible 40,000x bet, but I did notice the fact there is an alternative set of reels in the free games. Bah!

Our View...
Serengeti Lions slot is by far the best Lightning Box game I have seen. You feel involved and drawn to the events on the reels from the start. The graphics are good and animations brilliant, especially during the Stellar Jackpots feature which is triggered far more regularly than I expected but then again with a high RTP of 97.01% perhaps I shouldn't be surprised. The free games bonus is very entertaining and in both this and the base game you have some big hit potential too. The base game does pay small wins very frequently so maintaining a balance is not an issue you will be too concerned with. This slot is most definitely a stellar performance by Lightning Box...