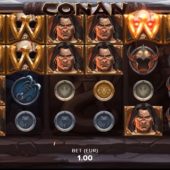 Conan slot by Netent is a rare film-based release from this famous Swedish developer, in this case the 1982 Hollywood blockbuster starring Arnold Schwarzenegger. Netent do film themes well as we saw with Creature From The Black Lagoon, Planet of the Apes and of course Vikings and here is no different with sound effects and animations from the film completing the atmosphere. The reels lie over an abandoned temple with dramatic music as we spin and some spectacular graphics as the many features unfold in front of our eyes. This however isn't the first manifestation of Conan as Cyptologic made a version years ago! So as with that older game, will Conan exact a barbaric revenge on our bankroll or not?

With the 6x4 grid Conan slot looks like a 4096-way game but we actually get 24 lines paying both right-to-left and left-to-right which effectively doubles any 6-of-a-kind wins. The pays aren't huge but symbols can appear stacked and your low values are coins from 1 to 1.5x bet for a line of 6, Hook, Sword, Helmets paying 2.5x to 3.5x bet and the 3 character symbols of Valeria, Thusla Doom and Conan paying 5x or 6x. We pay 20-coins to spin and a Shield is the scatter and appears on all reels, but this game has some tricks up its sleeve with the Wilds and modifiers as we'll now see!

You will notice that the 6 reels here on Conan slot have 3 distinctive pairs which is where the first of our 3 in-play features can occur. Randomly these paired reels of 1,2 and 3,4 and 5,6 may spin together conjoined which helps you trigger them as the relevant symbol needs to land on both reels in a pair. It is possible to get any 1, 2 or even all 3 modifiers during one spin.

Reels 1 and 2 Tower Wilds - Any wild landing on the first two reels will expand from 2 to 4 reel positions.
Reels 3 and 4 Mystery Symbols and Multipliers - Snake mystery symbols landing on these 2 centre reels will reveal any icon bar Wild or scatter with a random 3-7x multiplier applied if any Snakes fill the whole 4 positions on a reel. Landing a full stack of Snakes and either a Tower or Battle Wild may activate the Thoth Amon feature.
Reels 5 and 6 Battle Wilds - Any Wild landing on 5 and 6 will expand laterally adding up to 3 Wilds to the adjacent reel.
Thoth Amon - an additional 3-6 mystery symbols get added to reels 2 to 5.

Landing 3 to 6 Shield scatters triggers a free games selection. You get 10, 15, 25 or 50 spins for 3, 4 ,5 or 6 scatters respectively. The choices vary in volatility and all have the conjoined reels active but not the other modifiers.

Conan slot is certainly packed with features and has great graphics, animations and sound effects so is fully immersive for the player. The base game isn't volatile at all and you'd be very fortunate to exceed 100x bet during it, even with the pair modifiers. The free games aren't hard to trigger and appear I'd say ever 150 spins or so and that tells you the potential is quite low. Theoretically you could get about 2000x in the bonus with multiple 6OAK's of Conan with the 7x multiplier in play but if you got a tenth of this then you had a good bonus! The RTP averages 96.28% but ranges from 96.01 to 96.56% presumably due to the feature choices you make. Despite Conan's displays of power and battling, he isn't too much of a danger to your money and you may discover his soft side too...