Planet of The Apes slot

Free Planet of The Apes slot

Planet of The Apes slot review 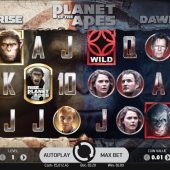 Planet of The Apes slot is a rare trademarked game from Netent and joins the esteemed musical Trio of Guns N Roses, Motorhead and Jimi Hendrix as another spectacular production by this Stockholm-based developer. Planet of The Apes was a 1968's classic sci-fi film and there were 4 sequels plus a TV series in the early 1970's too. A new film series started in 2011 with Rise of The Planet of The Apes, Dawn of the Planet of the Apes in 2014 and War for the Planet of the Apes in 2017 - in this case we actually have the 2011 and 2014 films combined in the theme 'Dawn and Rise' which is an imaginative way for Netent to get the most out of their licensing from 20th. Century Fox! The reels (and there are many of them) are transparent and lie over imagery from the films and naturally we get the movies' musical scores played as we spin. Will this great looking slot be a blockbuster or bankroll-buster for us?

Well, it will will immediately strike you that there are two sets of reels side-by-side, on the left 'Rise' and the right 'Dawn' each using characters from their respective movie. Each set is a 5x3 grid with 20 pay lines, but you can play for only 20 coins a spin despite getting 40 lines in total.

The pays are the same on each slot and are as follows: Wild awards 30x bet for 5-of-a-kind and can be stacked, Scatter 50x for all 5, Older Ape 30x, Younger Ape 20x, all 3 Human Characters pay the same 9x bet and finally card values Ace down to 10 all pay 4x for the full line.

As you would expect, Netent would not waste the copyright on a basic slot, so we get a couple of interesting events. Firstly, at random the reels may spin and the area behind gets lit up with a random symbol on both grids. It cannot be the same on both grids nor the scatter/Wild. Any matching symbol that lands on the under lit area sticks - if the symbol from one grid lands in the lit area on the other, it transfers over. This called the Dual Feature and usually awards a reasonable win if the symbol is a good one!

The 'Rise' feature occurs when a special icon lands on reel 1 of the left-hand Rise grid. All Ape and Human characters on the grid then award a coin value. It looks like Netent nicked this feature from Microgaming's Terminator 2, as it's similar to the 'T-800 Vision' random event there!

The 'Dawn' feature occurs at the opposite end of our display, on reel 5 of the right-hand Dawn grid and this time all Human and Ape symbols in view become a mystery icon and will all transform to the same symbol before paying wins.

We haven't finished yet, because you get replicating Wild reels as with some WMS games like Gems Gems Gems and Kiss whereby when a fully-stacked Wild lands on one grid it replicates to the other set of reels. Now of course the main feature......

Now it looks like we have Blueprint to thank for the idea that's applied here to the Rise free games. Three or more scatters on the Rise grid will trigger 10 spins, not able to be retriggered and during these any Wilds appearing will be 'banked' and on the last free spin be added to the grid at once. This is a feature Blueprint use in games like Ted and King Kong Cash and can mean a very lucrative final round!

The Dawn spins are triggered again with 3 or more scatters and this time we have a mechanism Play'n Go use in their adjacent block symbols slots such as Moon Princess and Viking Runecraft. You get 15 spins, again which cannot be retriggered but there are 3 different 'collect' icons overlaid on the reels. There are 3 meters one of which awards +3 spins, the next an Extra Wild symbol replacing one of the human characters each time and the last a multiplier 2x, 3x, 4x and 5x. All these three meters need 3 of the same 'collect' icon to initiate their enhancements.

Planet of The Apes slot has certainly seen Netent cram as much into it as possible and as you would expect we get some very real soundbites and pieces from the movies woven into our gameplay and features. Any experienced slots playerff will spot, as I did, where most of the mechanics were derived from but that's no criticism as if something is good why not make use of it? We also get a reasonably high 96.33% RTP to help us along and with the replicating Wilds it's feasible to get 5 on one grid paying 600x bet replicated onto the other thus doubling our win, so potential is there. The game has been well constructed and thought out and although your balance isn't guaranteed to rise, this could well prove to be a classic and the dawn of a new era for your slotting...