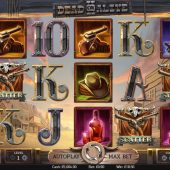 Dead or Alive 2 slot by NetEntertainment is the long-awaited sequel to their clunky old high-volatility Dead or Alive with its western theme of whisky and cowboys and reputation for colossal payouts when the famous 'wildline' was hit! Sequels can be and often are disappointing in the slotting world, think of WMS and Kronos Unleashed, a lazy copy of the original Kronos theme into their existing colossal reels mechanic and even Netent themselves with Twin Spin being ruined by transposing it to their cluster pays mechanic as Twin Spin Deluxe. Well let me tell you right from the off, this new Dead or Alive 2 slot game is going to be a classic!

The theme has been modernised with the reels set as before over a rickety wooden Saloon Bar but now with colourful and very distinct characters and symbols on the reels, plus the western guitar and banjo style music has been softened and improved to dramatically reduce the irritation factor of the harsher old soundtrack. The Wild West was once a risky place to carry your gold around in, so can you leave this saloon with your bankroll in one piece?

As before, Dead or Alive 2 slot gives us 9 fixed pay lines over 5 reels of 3 rows. Symbols are all single including the Wild and scatters on all 5 reels. The 5-of-a-kind pays are similar to before and pay 1500 coins for the Wild, 1000 for Sheriff's Star, 750 Pistol, 400 hat, 300 Boots and 200 Whiskey. These are for a 9-coin bet so the Wilds for example pay 167x. There are five card values paying 100 down to 25 coins. Netent also retained the massive 2,500x bet reward if you trigger the feature with all 5 scatters. So down to the nitty-gritty of the Dead or Alive model, the exciting and potentially big-hitting bonus round and we have some surprises here!

You need 3 or more Cow Horn scatters anywhere on the reels to trigger the free games. This is where the real action starts as you now get a choice of 3 different mechanics of lower, middle and super-high volatility.

Old Saloon Spins - don't worry, Netent retained the original Dead or Alive bonus as the middle option and you may well be familiar with the workings. 12 free spins, Wilds are sticky and all wins are paid at 2x multiplier. If you get a Wild on all 5 reels, 5 extra spins are granted. If these Wilds form a winning line, they pay 333x bet. If you achieve this prior to the 5 extra spins effectively you are getting the win paid at least 5 more times and should you have 2 or 3 Wild lines then as previously some absolutely insane totals can be won.

Train Heist Spins - 12 spins in which every Wild will add 1 extra spin but won't be sticky. Each Wild though increases the multiplier by 1x and if you get to 16x multiplier, 5 extra spins are awarded in which any further Wilds appearing also add 1 spin and increase the multiplier 1x for each in view. The multiplier is unlimited and this is the lowest of the volatility options.

High Noon Spins - this is the highest volatility option and is the same as the Old Saloon spins with sticky Wilds and 5 extra spins if Wilds appear on all 5 reels during the initial 12 spins. This time though, if 2 Wilds are stick on any one reel, they become 2x multiplying Wilds, if all 3 rows on a reel have Wilds then 3x multiplier is applied. These are multiplicative across the reels so theoretically you could win in excess of 100,000x bet during the bonus. On the first day of release, a German player won 30,079x bet in this feature!

Well, what can I say? I've been waiting for a few years for Netent to produce a truly exciting slot for the volatility seekers and here with Dead or Alive 2 slot they've nailed it in just about every possible way. The graphics, symbols and sound effects along with the music are improved beyond all recognition and the game runs far more smoothly now. The familiar icons are retained as is the generous RTP, in this case 96.80% and it was a great idea to retain the famous bonus mechanic of the original.

Netent have also acknowledged the popularity of the increasing multiplier format seen on Megaways slots such as Bonanza with the Train Heist bonus and not only that, have actually increased the big hit potential of what was already a mad free spins game by adding Wild multipliers to it in the High Noon spins. If this game is not considered an absolute classic in years to come like Immortal Romance for example, I'll eat my hat! I don't think it's necessary for me to say whether I'll be visiting this rough old saloon again...