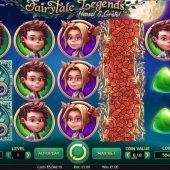 Hansel and Gretel is the second in the 'Fairytale Legends' series from Netent. The previous edition, Red Riding Hood, has proved to be quite popular among players with its frequent and varied in-play bonuses and different features despite the fact that like this game the graphics would actually appeal to children of the age to appreciate fairytales. At first when looking at the red treasure chest scatters and hearing the classical fantasy music you may think the game is a copy but there are some important differences as we will discover...

Unlike its predecessor we only have 10 pay lines here over the 5 reels and 3 rows and all the symbols are fully stacked. Secondly, the game has 'adjacent pays' meaning that 3 consecutive symbols on any pay line award the win, whether 1, 2 and 3 or the centre 3 reels or last 3 reels. The game's title icon is the highest-paying 5-of-a-kind at 40x bet followed by Hansel and Gretel at 10x. The lower icons are all coloured gemstones paying 4x stake for the 5.

There are stacked Wilds on reels 2 and 4 awarding no multiplier but you will get a respin if one appears fully in view and as mentioned we are re-introduced to the red treasure chests as scatters on reels 1, 3 and 5. At the commencement of any spin the benevolent Fairy may appear from the left and sprinkle her magic dust onto the grid to award one of 3 different benefits:

Fairy Wonder Spin - she will turn 5-9 tiles into the highest title icon before the remaining reels stop.

Fairy Surprise - you only get this after a losing spin, and she will select a symbol at random. Starting with the lowest other symbols will transform to match until a win is awarded.

Fairy Wild Spin - any one or two of reels 1, 2, 4 and 5 will become a stacked Wild and and wins will be paid, then you get a respin with them held in place.

When landing 3 of the familiar red treasure chests on reels 1, 3 and 5 you will be given 3 boxes to choose from and will reveal one of 3 features:

Candy House Bonus - there will be a house in the forest covered with 15 sweets. You pick 3 and the values aren't revealed but before they are you opt for either the average value of the 3 or pick one and take that. It may or may not be the highest and the values range from 1 to 120x bet.

Coin Win - an annoyance to any player when wanting free games or something exciting after waiting to trigger the feature; you get a staggering 15x bet.

Free Spins - 10 free games where the enhancement is that now stacked Wilds also appear on the end reels as well as 2 and 4. You can retrigger them and also get 2 extra spins for 1, and 4 extra spins for 2 chests appearing. As in the base game, any stacked Wild(s) offer the respin.

Fairytale Legends Hansel and Gretel slot is actually quite a decent game with good mechanics and frequent in-play features and a high win frequency of which some can be quite good. The two negatives are surely the graphics/theme which are a bit too juvenile in my view and of course the dreadful outcome of the 'coin award' when triggering a feature which is a let-down on any slot, most notably their Guns n' Roses game and Microgaming's Tarzan. Why developers make you wait for a feature and then potentially 'reward' you with a win they could just have easily dropped in via the reels on any spin, is beyond me! The RTP is a very decent 96.71% and you have the quite common Netent maximum pay on a spin of 400x bet. So, like Hansel and Gretel, will you follow the trail of breadcrumbs to this slot?