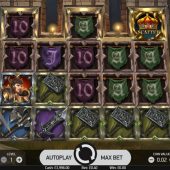 Fire Siege Fortress slot has possibly one of the most dramatic titles I've ever seen for a game and you can almost see what the game will look like before opening it up. Well, if you like dark medieval subject matter this spectacular-looking slot won't disappoint you with its crisp, clear but detailed grid and graphics, all cleverly worked into a fort during the darkness of night. Forget other games with this theme like IGT's babyish Medieval Money or WMS' rather bland Knight's Keep - here it looks real and gritty! It may not bode well for our bankroll if it's both under siege and facing several fiery hazards to boot; can it escape with us - or not?

On the reels...
The first thing you'll notice is that we have an odd reel pattern here, with 576 ways over a 4-3-4-3-4 rows grid. The three 4-row reels have the top symbol separated from the rest and scatters act slightly differently when landing in them. Now it's an uncanny coincidence maybe, but Netent's fellow Swedes Yggdrasil recently released 'Hanzo's Dojo' which does exactly the same thing, although in that case the 3 top rows are adjacent over the centre 3 reels as opposed to 1, 3 and 5.

So, the icons and pays: we have symbols which can appear singly or double-stacked and Crown scatters which only appear on the 4-row reels. The 5-of-a-kind pays are 6x for the Dragon, 5x Warrior and 2x for the weapons which are a Sword, Axe or Hammer with 5 card values all awarding 1x bet for 5. It's the Wilds which set Fire Siege Fortress alight though.

Wild weapons
You only see single Wilds on the centre 3 reels but these can have some beneficial effects if landing in the bottom positions which are surrounded by fire. Should the reel 2 Wild land at the bottom you will see the Archer Attack feature whereby he fires one or more flaming arrows on to the grid in random positions. If reel 3 Wild is at the bottom it becomes the 'Dragon's Breath' and turns the reel into a flaming expanded Wild. Lastly, if the Wild lands at the bottom of reel 4 you will get the 'Trebuchet Assault' whereby one or two 2x2 block Wilds will be launched onto the grid. For the record, you can get 2 or even all 3 of these Wilds on the same spin.

Scatter bonuses
I like games which can do something for just the two scatters. In this case there are two possibilities as long as one of the two lands in the top row (Turret position) of reels 1, 3 and 5. In this case you'll either be awarded the 'Tower Coin Win' of 5x bet or 3 re-spins.

The main event though is getting 3 scatters on reels 1, 3 and 5 because this triggers our free games bonus. You get 3 spins for each scatter but an extra 3 for each that lands in the top turret position of the reel. So you would get 9, 12, 15 or the maximum 18 if they all appeared at the top. The free games don't have a multiplier but you do seem to see more of the Wild Weapons as described above appear. There is some potential here too when 2 or even all 3 are in play as it's possible to get hundreds of ways of 5 symbols in one spin.

Our View...
Fire Siege Fortress slot is certainly one of Netent's better games released in the last couple of years in my opinion. The appearance, effects and graphics are very good and the theme works in every respect especially when considering the possibilities available in the base game with the Wild Weapons and 2-scatter chances. The RTP is 96.01% which is marginally lower than usual for Netent but won't make a difference to the enjoyment of a generally entertaining and different slot here, the free games being quite exciting too whether they reward you or not. As far as the theme goes, it'll take a very special slot to match IGT's sadly discontinued Fortress of Fortunes which was one of my all-time favourites, but I'll definitely be back to lay siege to this fortress once again...