Jack and the Beanstalk slot

Free Jack and the Beanstalk slot

Jack and the Beanstalk slot review 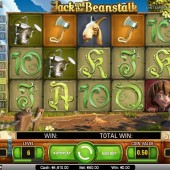 I've been a bit underwhelmed by some of NetEnt's slots of late (maybe it's just an evil editor dumping me with the bad ones to review) but Jack and the Beanstalk deserves to be mentioned in the same breath as the developer's high-quality offerings like Demolition Squad.

A 5-reel, 20-payline 3D game, it comes with all the accoutrements you'd expect from a leading slots firm, and boasts a maximum jackpot of $15,000.

Those ain't small beans. The stunning animated intro sequence gives you an idea of what's to come.

Taking its cue from the classic children's story of a poor village boy who loses his family's last possession away - a cow - for a few magic beans, only to see it grow into a beanstalk leading to a gold-rich giant's lair.

These days, of course, such rags-to-riches stories don't exist outside Lottery wins and progressive jackpot takedowns, and anyone attempting to get rich by planting magic beans in their back garden would be in the psychiatric ward before you could say, 'Fe Fi Fo Fum'.

With reels as friendly as the $0.01 minimum bets, we get plenty of icons from the fairytale: Jack himself, the two-headed giant, treasure chests, watering cans, the axe used to chop the beanstalk down, and, erm, a goat. The 10-through-Ace symbols have been given a makeover too, here formed from the twisting vines of the beanstalk.

Nothing is quite as it seems in the story of Jack and the Beanstalk, and so it is with this game's Wild. Here it acts as a 'Walking Wild', which combines Wilds with re-spins. When you hit one on the reels, you will be awarded a re-spin, but the Wild symbol will jump one reel to the left, awarding another re-spin. Not only that, the Wild wins are trebled. As always, the Wild substitutes for all symbols other than the Treasure Chest and Key symbols.

The Scatter, meanwhile, is the fabled treasure chest. Get three or more of those on the reels and you'll be awarded 10 free spins. Hit another three chests during the free spins and you'll bag yet another five spins.

NetEnt aren't finished there, though. More features can be unlocked with the aid of the Key symbol, which only appears on the fifth reel. The more you collect, the more features you'll unlock.

With some really exceptional bonus Wild features, together with some 3D animation that will have Sheriff Gaming diving for cover, NetEnt have hit a golden hen with this slot.

If it's put you in the mood for more fairytale hijinks, don't forget to check out Blueprint's fairytale-themed Wish Upon a Jackpot, which boasts tonnes of bonus features.