Rage of The Seas slot slot 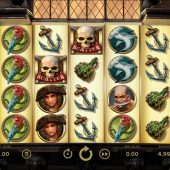 Rage of The Seas slot by Netent involves dramatic music, sound effects and animations courtesy of those darned pirates that seem to be everywhere nowadays. It looks interesting with plenty going on and it would do well to be better than a few other slots of the pirate theme preceding it by a few months. These are namely Pirate Kingdom Megaways`slot, a creditable game in the form of Pirates’ Plenty Battle For Gold by Red Tiger my personal choice, Jolly Roger 2 by Play'n Go. So can we return from our voyage with a bigger bankroll or will those raging seas claim it forever?

We have 5 reels of 4 rows apiece here on Rage of The Seas slot, and 1024-ways to win - well to begin with anyway! Symbols can appear stacked and singly with the 5-of-a-kinds quite low, 2.50x for Blackbeard, 1.25x for the other 3 characters and 0.75 or 0.4x for the item symbols such as wheel and parrot etc. You can get stacked or spreading Octopus Wilds on reels 2,3 an 4 the same ones as the Boost symbols, and Skull scatters on all of them. You get modifiers too but these are best described in the boost section.

When one lands on reel 2,3 or 4 that reel will expand to become 7 rows high and increase the ways to 1792, if 2 were in play 3166 ways and finally 5488 ways if all were in play at once which would trigger the free spins we'll read about next. When you get a Boost symbol, it awards one of five modifiers for the next 4 paid spins too. If you get another on the same reel already expanded, it awards 2 more Boost spins or else on a different reel your total is increased by 4 and another modifier applied. When expanding the Boosted reels to all 3, your free games are automatic and you will get the remaining un-played Boosted spins added to the 5 you get by triggering this way. The modifiers are:
Spreading Wild - spreads to 1 or 2 adjacent positions except on reel 1 or 5.
Stacked Wilds - up to 4 rows high on the middle 3 reels.
2x Multiplier - exactly what it says.
Minor Reel Upgrade - all wheel and bottle symbols removed from the reels.
Major Reel Upgrade - all anchor and barrel symbols are removed from the grid.

You need 3 to 5 Skull scatters for 5, 8 or 12 respectively. You can get them triggered also by boosting all 3 middle reels as described above in which case remaining boost spins are added to this total. You play on whichever reels are boosted and there are always 3 modifiers chosen before the spins commence if triggered naturally, or you carry over the 3 modifiers in play if you trigger them via the 3 Boost reels. Any boost symbol appearing during the bonus will add 2 extra spins, no limits.

With a RTP of 96.04% and very good quality graphics, animations and sounds Rage of The Seas slot ticks several boxes, with the only drawback being the lack of big-win potential as with so many Netent slots. That said, I had fun testing this out and the boost modifiers are frequent if not very lucrative, but the free games aren't hard to trigger and can pay a couple of hundred times bet if you trigger them via the expanded boost reels. I have to admit, this is one Netent slot that actually didn't make me rage...