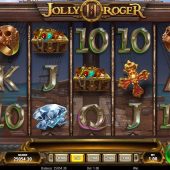 Jolly Roger 2 slot from Play'n Go joins a whole host of pirate-themed games as well as their own original Jolly Roger slot. We have Megaways versions like Iron Dog's Pirate Kingdom and standard fixed lines games such as Red Tiger's popular Pirates’ Plenty Battle For Gold slot, so this game will have some stiff competition. The reels are set in the captain's wooden mantelpiece from his cabin, with rigging and sea behind and of course, the danger-laden classical music to complete the scene. So can the game be jolly for our bankroll, or will it get a good rogering?

There are 20 pay lines here on Jolly Roger 2 slot with single symbols. Firstly, the 5-of-a-kind pays are Wild or Chest 10x, Diamond 7.5x, Cross 6x, Skull Ring 5x and five card values of 2.5 down to 1x for a full line. Pirate scatters appear on reels, 1,3 and 5 and if you check the game title above the reels it sometimes reveals a Compass multiplier of 2-10x. See that, you know you're getting a winning spin for it to work on. Other than that, nothing in the base game but we do get a good range of features.

So having landed the 3 scatters on the odd reels, you are taken to a screen of scrolled maps which you select until 3 of the same are revealed.
Instant Prize - as usual the one to avoid, maximum 20x although the Compass multiplier may activate on the win.
Bottle of Rum Spin - pick from the 5 bottles under the reels. A good one adds a randomly-placed Wild reel, a poison bottle ends the picks. The reels then spin to hopefully produce a decent win with any Wild reels you have.
Battle Free Spins - you get 3 lives and battle enemy ships. The middle positions spin and you need 5 of your coins to appear as opposed to the enemy's 4 to win. If you lose, a life is lost, win and a life gained plus the prize. Beat a privateer and a free spin with a Compass multiplier and victory prize is awarded. You will always defeat merchants, but don't get an extra life, just a prize. Prizes can be Wild reels, extra Wilds, synchronised reels or symbol upgrades to Chests. Lose all your lives and bonus is over, but it can go on for quite a while!
Treasure Hunt spins - 10 free spins initially, collect 4 Maps to find treasure and improve remaining spins. Buried Chest awards 2 or 3 extra spins.

Jolly Roger 2 slot has a 96.19% RTP and a decent base game performance. The graphics are good, as are the sound effects and animations. The big drawback is the two rubbishy features you tend to get when triggering the bonus, both with low potential. These wins may as well be allocated to the base game, because it's frustrating and annoying to trigger the bonus and miss out repeatedly on the two most lucrative and entertaining features, the free spins rounds. I have never understood why developers do this, it simply annoys the player. Anyway, should you avoid the dross, both of the free games rounds can go on quite a while and there is 5000x potential according to Play'n Go. Good luck getting them though, as the alternatives won't leave you feeling jolly at all...