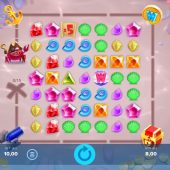 Reef Raider slot by Netent is the ultimate proof that when one developer creates a winning formula, the others will predictably follow like sheep. This game simply copies the mechanic Play'n Go have used numerous times for example with Energoonz slot, later doing the same thing with Reactoonz 2 slot or if you don't like the juvenile look they have (as does this game) the one released between those two, Viking Runecraft slot. Pathetic cartoon characters surround the shallow seabed here littered with gold coins and seaweed with an accompanying soundtrack that's just as daft. So will our bankroll run aground on this reef or can we earn a few doubloons in this raid?

On the grid...
You have a 7x7 grid here on Reef Raider slot with cluster pays for 5+ adjacent symbols which are replaced from above when winning clusters are removed. You get bars around the grid with 15 sections that fill when certain symbols land in wins and each corner contains a modifier triggered when you progress round the bars to it. The pays are for 4 medium-value symbols with a maximum value of 25+ in a cluster and these are coloured gem shapes paying from 150x down to 25x at the top level and 1x down to 0.5x for the lowest 5-symbol level. The low-values are coloured sea shells from 22.5 down to 15x for the top level pays and 0.4 down to 0.05x for the lowest level of 5 symbols. You can get Maps with 2,3,5 or 50x multipliers on them but only 1 per spin and these don't count in the cluster but need to be adjacent to it.

Wilds
Any winning cluster with at least 3 matching symbols in (not including any Wilds) creates a Clam Wild in one of the vacated positions. You can also get standard single Wild Coins naturally on the grid.

Modifiers
As you progress and the meter surrounding fills by 1 bar each time a Clam Wild is removed from the grid on the same spin, each object in the corner is triggered in turn for its modifier:
Anchor Drop - 3 bars and then 1-3 random symbols are removed from the grid.
Random Wilds - 6 bars and then you get 4-8 random Coin Wilds added.
Mystery Chest - 9 bars means 2-16 symbols are removed and replaced with the same mystery tile.
Cannon Blast - 12 bars means a random symbol is removed along with all symbols in the same row and column as the selected tile.

Free Games
When 15 bars are filled you 9 free games with +2 for each 3 bars over the 15. Before you begin, the centre position becomes the centre of a cross which will reveal 5 mystery symbols of the same kind every free spin. Each free spin may also randomly reveal more mystery symbols as well as those 5. If one of those joins the cross adjacently then it too remains sticky throughout. You get +1 spin for 15 bars charged during them with +1 for each 3 bars over the 15. We are told up to 8,000x bet is possible here.

Our View...
Reef Raider slot has a RTP of 96.10% but beware! as like Play'n Go Netent are offering reduced RTP models now so it could be as low as 84% down in increments of 2%!! The sounds and music are simply infuriatingly bad as is the overall appearance of this childish nonsense theme. Unless you hit a lucky 50x multiplier tile you'll win nothing of note in the base game so you can instead enjoy the frustration of waiting ages to get to 15 bars on the meter, often falling just short time and time again. You should get a decent enough result when actually landing the bonus but in my case, that hope never overcame the burning desire to leave this daft slot as soon as I could and I never intend to return...