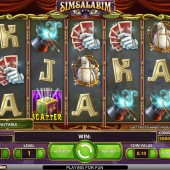 The magic historians among you will know that Sim Sala Bim was the ‘Abra Cadabra’ of choice of legendary 20th Century magician, Dante (also known to his Mum as Danish rabbit-puller, Harry Jansen). Dante pioneered the top hat and comedy moustache look for stage magicians for years to come, and it’s this period of magic that Scandinavian slot developer NetEnt is celebrating with its slot named after the conjurer’s magic words.

A 5-reel, 25-payline game with betting from just $0.01, and if you’ve played other magical slots like Betsoft Gaming's trickery-filled True Illusions 3D or Sheriff Gaming’s very similar entertainment-themed slot, Abra Cadabra you should enjoy this.

On the reels are plenty of suitable icons, such as magic boxes, rabbits leaping out of hats, playing cards, doves in cages, and magic wands, as well as the usual 10-through-Ace symbols.

The Wild is the magician himself, who substitutes for all symbols (no magic involved) other than the Scatter.

Look out for that Scatter – the Magic Box – as three or more across the reels activates a free spins round with anywhere from 10 to 30 spins up for grabs. There’s a 3x multiplier on free spins wins, and they can also be re-triggered.

There is one more bonus round, essentially a Pick 'em Bonus triggered by three or more bonus White Rabbit symbols in a row from left to right. Here, you simply have to choose from a selection of top hats to reveal your magic prizes.

For magic nuts, Sheriff Gaming’s game probably provides a more satisfying return on your investment. Strangely with Simsalabim, the reels spin almost in slow motion, and sadly there’s no skill stop feature to hurry things along.

That aside, the game is pleasant enough but not up to the same level of quality of other NetEnt online offerings.