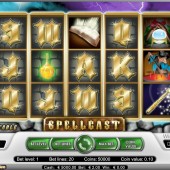 Hubble bubble, toil and trouble: online casino slot developer NetEnt have been casting spells over slots fans over the years, but this slick video slot could be the one to provide the big fireworks.

A slot with 5 reels and 20 paylines, Spellcast has a nice range of betting starting at just $0.02 a coin, and the game carries a top payout of $20,000 if you’re playing at the top betting level.

There’s also a Skill Stop feature in the base game – common to many NetEnt’s other slots - and bonuses, for what they’re worth, sees free spins galore being dished out to lucky punters.

Look out for the wise Wizard symbol as it acts as the game’s Wild, substituting for all symbols other than the Scatter. This is a very special Wild, however, as five beardy wizards across the reels will bag you a fantastic 10,000-coin jackpot. Wild wins carry a 2x multiplier as well.

The Scattered Crystal Ball will trigger 15 free spins when you hit three or more across the reels. You’ll also get a great 3x multiplier with your free spins, so it’s a pretty nice bonus to hit.

In terms of bonuses, Spellcast won’t set the world alight, but 15 free spins at 3x straight off the bat isn’t to be sniffed at. Having said that, if you’re after a bit more bang for your buck on a magic tip, it might be better to hunt out other gems.

The 40-payline excitement of Leander Games’s sorcery-themed Potion Factory, with its huge range of bonus rounds and Expanding Wilds, might suit bonus feature hunters a little more than this offering, while Sheriff Gaming’s magician-inspired slot, Abra Cadabra, is a typical piece of Sheriff 3D goodness.