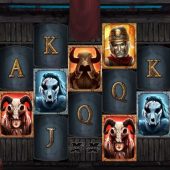 Legion X slot by NoLimit City retains 3 of the 4 'x' factors in one game as did the previous release, Das X-Boot slot. These are xWays, Infectious Wild and xNudge. So like their Mental slot we get these 3 distinctive mechanics to enhance our play and provide the variation of features and potential. Here the theme is Rome with the reels set over a combat stockade for our brave gladiators and we get the relevant thematic music and sound effects too. So NLC give us the first battle subject since El Paso Gunfight slot and hopefully the same quantity of action! So can our bankroll escape these desperate slashing of these swords or will it pay the ultimate price of defeat?

On the reels...
We start with single symbols on 5 reels in a 2-3-2-3-2 row configuration for 72 ways on Legion X slot. It can go to 4-3-2-3-4 or 216 ways during play and the 5-of-a-kind pays are quite low as we come to expect, as they rely on extra expanding symbols and Wilds of which the best are the Legionnaires. So our special tiles aside from the special scatters of Gold Masks on the middle 3 reels are:
x-Nudge Wilds - a stacked Wild which will always nudge to fill its reel. It earns a 1x multiplier on top for every nudge necessary to fill the reel. These add to each other if appearing on multiple reels. if you get an Infectious xWays symbol on the same reel, the symbol will expand first before the Wild nudges, thus increasing the potential multiplier for the reel.
Infectious Wild - only lands on the end reels and converts all instances of a random low-pay symbol into a Wild on the centre 3 reels, if both land in one spin all low-pay tiles on the middle 3 reels turn Wild.
xWays - this symbol can also appear on reels 1 and 5 and will expand to award 2 to 4 symbols the same but not Wild or scatter. If both land the symbol chosen will be the same and it will also expand if present on the 3 middle reels.

Free games
There are a few types as we are used to from NoLimit City:
Legion X Spins - the basic trigger via 3 scatters on 2, 3 and 4 triggers 8 spins. The game now adds a row to reels 1 and 5 increasing us to 108-ways. xNudge Wilds increase the multiplier and these Wild multipliers aren't reset between spins now. If you land xWays and/or Infectious Wild on reels 1&5 simultaneously you upgrade to the next bonus for the remainder. Just one of them on either reel will add +1 spin.
Legion X Equestris Spins - triggered by the 3 scatters plus two xWays symbols in the same spin. You get 10 and now 2 rows are added to reels 1&5 for 216-ways. xNudge Wilds will again only increase in multiplier but now xWays tiles remain sticky and will reactivate every spin with a fresh symbol.
Legion X Fretensis Spins - triggered by the 3 scatters plus two Infectious Wild symbols in the same spin. Again, we get 216-ways now and the increasing xNudge Wild multipliers, but now any Infectious Wild symbol landing will remain in position and activate for the remaining spins.
Legion X Gemima Spins - triggered by the 3 scatters plus one Infectious Wild symbol and one xWays symbol in the same spin. Now you get the 216-ways, increasing xNudge Wild multipliers but with both the Infectious Wild and xWays tiles sticky throughout. This has the highest potential and is most likely to earn the win cap of 33,333x bet with the 'All Hail the King' animated sequence!

Our View...
Legion X slot has a 96.04% RTP but can be 94.04% at some casinos, so check your site. You can in some jurisdictions buy the 4 levels of bonus for varying amounts, which raises the RTP to 96.24% for the lowest feature and 96.71% for the top one which costs 1200x bet! Anyway, the game itself is slightly dull in colour and sounds when the base game is in action, with limited potential for the occasional Infectious or xNudge Wild spin. The feature brings it to life and it isn't too hard to trigger the basic one but crikey, you'll be lucky to see much in the way of returns from it. Again, the fun here is all geared around the enhanced features which are very rarely triggered in the base game or base feature upgrade and only really likely via the bonus buys - bad luck if you don't have those. So we have yet another slot frustrating for the 'normal' low-stakes slot player who slugs a session out and made instead for the high-budget bonus-buying streamer brigade. No Roman sandals on my feet but I do detect a Roman Scandal here...