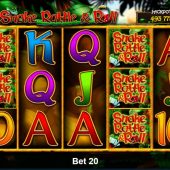 Snake Rattle and Roll slot is a rare diversion from the usual Novomatic formula in that we have a very low volatility game and for once we have lost their usual wheedle-and-trot reel noises, to be replaced with some rather irritating Indian Sitar and Drum music. The reels are transparent and sit over a jungle background and there are cartoon graphics to annoy you along with the soundtrack, plus a snake charmer character lurking to the right of the reels. Can we escape this dangerous jungle with our cash or is the deadly wildlife here going to take a large bite out of it?

Not all games with repetitive and irksome music are bad, as we have seen with Big Time Gaming's Bonanza so we hope the graphics and pays can redeem the game. These are very basic over our 20-payline game of 5 reels and 3 rows, with the game's logo paying 2x bet for 5-of-a-kind and like the 6 card values, the logos are stacked. The card values pay either 28 or 20 coins and seeing as we pay 20 coins to play these values are pretty terrible.

You might think then that the real value lies in the Wilds? Think again! These appear singly in the form of a coiled Cobra on all reels and can expand either horizontally or vertically until they hit the edge of the reels. So a Cobra on the bottom left position will expand along the whole bottom row for example and give you a Wild Line. You might celebrate this if you see it, but don't get carried away as the 5-of-a-kind Wilds pays, wait for it, 3x bet! Yes, that's 60x bet for a full screen of Wilds. Oh dear Novomatic! The little boy may appear on the screen during any spin and the Snake Charmer plays his Pungi and if any notes land on the reels you get an Expanding Wild for each one, usually 2 will land. An unusual random in-play feature for Novomatic and you may trigger a 'big win' of 10x bet or more!

Surely we can get some potential here? If you see 3 of the Dice Scatters anywhere in view you will trigger a board game with 3 rolls, and one extra roll for each scatter over 3. You will land on either extra Wilds (these are added to the free spin reels which you will collect later) or extra rolls and finally extra free spins. There are 3 different free spins grids above the reels - yellow is your standard 20-line base game reel set, blue has an extra row so is a 5x4 grid with 40 pay lines and finally the red set is a 5x5 grid with 50 pay lines.

Landing on a wheel icon awards a spin and it has colour segments overlaid with +1 to +4 plus a segment with all 3 colours overlaid with extra spins too. This works like IGT's Wheel of Fortune Triple Action whereby you add extra spins to the colour of slot above the reels, or maybe all 3 at once. Your yellow, blue and red slots all start with 3 free spins in the bank and you can choose afterwards which grid to play, naturally choosing the one with most spins collected for it. The more Wilds you've collected indicates how good the bonus will be. You can't retrigger the spins on the slot you choose, but there are baskets added to reel 5 and if you collect 5 you get to choose one which will reveal 1-5 extra spins.

If you are linked to the Progressive or the casino has an internal jackpot you can win this by getting to the end of the board during the bonus feature, or if you throw 'Snake Eyes' (double 1) on the first roll the Snake Charmer may take you straight to the jackpot at the end.

Snake Rattle and Roll slot shows some innovation from Novomatic but it is simply unplayable due to the dreadful and pointless math model. You get average graphics and animations and the same with the RTP at 95.04% but what isn't average is the minuscule potential the game has. Even if you were to get the full screen of Wilds on the 5x5 grid in the free games that would only award 150x bet, and using Netent's Starburst as a benchmark for low-volatility slots that can pay 500x bet! You'd expect frequent bonus rounds, but no and the base game pays are awful unless the random Charmer plays his Pungi for you. This slot rattled me and I've rolled away from it forever...