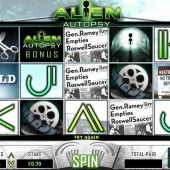 Area 51 – the secretive army base purported to contain the remains of a crashed UFO and its dead extraterrestrial inhabitant – has fascinated UFO and conspiracy nuts alike for decades.

In fact, the US government recently revealed that Area 51 was used for the development of the highly secretive U2 spy plane during the 1950s, hence the shroud of mystery.

Even in 1995, a (faked) video was released depicting an autopsy of the alien that had been ‘captured’, and it’s that episode that slot developer OpenBet have tapped into with their Alien Autopsy game.

The Wild symbol is clearly labelled, and it substitutes for all symbols other than the Bonus Scatter. Look out for the Alien Autopsy logo, as that’s the Bonus. Three or more anywhere on the reels triggers the game’s sole bonus feature.

Here’s where the game earns its ‘autopsy’ moniker. Essentially a (very messy) Pick Me Bonus game, you’ll get to pick three bits of the grey alien to dissect, each one revealing a different cash bonus.

It’s actually quite nicely done – pick the brain, and a video cutaway will show the surgeon’s knife sinking deep into the alien’s head. Lovely!

The game is accompanied by some nice X-Files –style sound FX and moody music in the background, and the gameplay is nice and smooth. Bonus hounds will probably hanker for a little more action, but for those who enjoyed the Martian invasion madness of Betsoft Gaming’s Arrival or Cryptologic’s comedy take on the alien invasion, Area 21, you should get a kick out of this.