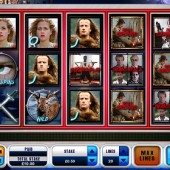 “There can be only one,” famously screamed the tagline to the hit 1980s movie about a clan of immortals roaming around Scotland lopping off heads in a battle to become the last immortal and claim the ultimate prize.

After their successful Robocop movie-themed slot, OpenBet have spread the net out a little wider with an online slot adaptation of the film that starred Sean Connery and Christopher Lambert on-screen.

Unlike Robocop, however, which had cartoony recreations of the characters from the film, here we get a lot of actual photography from the Highlander film, so fans of the movie are well catered for.

Also catered for are gamblers of every bankroll, with betting ranging from $0.01 to $100. On the 5 reels of this 20 pay-line game we get plenty of nice images from the film, including symbols of Lambert and Connery’s characters, the bad guy, swords, and the Highlander’s mortal wife, Heather.

Slot developer OpenBet don’t really do boring bonus rounds, and so it proves once again in Highlander. 15 free spins can be won by hitting three or more free spins icons on the reels anywhere.

That sounds fine, but during spins ‘Super Wilds’ can appear which stay in place on the reels to award more wins. It’s just as well that a Sticky Wild like this is featured, as the regular Wild symbol – the stag – is just that: pretty regular. It does, however, substitute for all regular symbols in the game other than the bonus icons.

Finally, three or more ‘Bonus’ symbols anywhere on the reels triggers the Battle Bonus game, which sees Macgregor up against his psychotic nemesis, Kurgan in a battle to become ‘the One’.

If you’ve ever played the medieval fantasy battle slot, Crusade of Fortune, from developers, NetEnt, you’ll know what this is about: select a battle option, watch MacGregor and Kurgan go for it, and cheer the Highlander on to bigger and bigger wins. Defeat Kurgan three times, take his head, and claim the game’s biggest jackpot of $6,250.

While not quite on a level with slot developer Microgaming or the well-renowned slot brand Playtech, Openbet’s movie tie-ins are nice enough – plenty to keep the fans pleased and enough interesting slots quirks to keep the gaming fans quiet too.