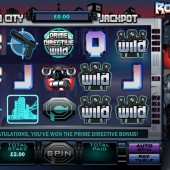 With the remake of the classic 1980s sci-fi actioner set to hit cinemas in 2014 (let’s hope it keeps the violence and humor intact) OpenBet release a video slot based on the original film.

If you’ve never seen it, Robocop is set in a future Detroit where the police are privatized and crime rampant.

The only solution is a new generation of police officer: part man, part machine – all COP!

As with OpenBet’s other slots, the betting ranges from the friendly ($0.05) to the hardcore ($5) per coin, and there are some nice features included. Luckily for those with a nervous disposition, the film’s often graphic violence has been toned down somewhat in OpenBet’s 5 reel, 20 pay-line online slot, but a lot of the characters have survived.

On the reels we get the regular Jack-through-Ace symbols – here depicted in Robocop fonts – along with a police car, the OCP logo, a picture of Delta City, the Ed209 battle robot, Robocop, and his partner.

The Scatters, meanwhile are the OCP logo and Delta City symbol. The Delta City blue Jackpot symbol will increase your wins on a spin if it appears anywhere on the reels. The regular Delta City logo gives out a juicy 300x your stake jackpot if you hit five on the reels.

The OCP logo will trigger the game’s bonus feature – the Assault on OCP - if you hit three or more on the reels.

A bonus game with multiple levels, you simply have to work your way through the game, making it through four areas (Warehouse District, Hostages, OCP HQ and Executive Office) to earn the big bucks.

In typical OpenBet style, the graphics are presented in a nice cartoon style, with Robocop himself standing to the side of the reels spinning his pistol. In the background, meanwhile, there are police sirens and snippets of Robocop music to put you in the mood.

Having said that, I probably would have liked to see some real cutaways from the movie; time to dig out that DVD, perhaps.

For fans of cops ‘n’ robbers mayhem, check out a couple of Sheriff Gaming joints: Piggy Bank with its serious bank heist-themed edge, or the crime-fueled joy of Beretta’s Vendetta.