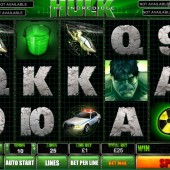 A tie-up between software developer Playtech and Marvel comics has seen the release of some amazing video slots over the years.

While some have really hit the mark - Avengers, Spider-Man, or Iron Man 2 - others have missed it altogether with a wayward shot of the laser. (Fantastic Four, we're looking at you.)

However, the slot based on everyone's favourite big green monster, The Incredible Hulk, is a different matter.

The Incredible Hulk is a game that has everything you could want, including two bonus games, expanding wilds on up to three reels, and a bit of anarchy from the raging green brute for some added entertainment.

In terms of symbols, we get mostly some heavy stone 10-through-Ace icons as well as Hulkster himself, a police car and a nuclear symbol. Where would we be without a nice radioactive icon to help form our symbols?

I will start by talking about the two bonus rounds in this online slot. The first one is the free spins bonus. Rewarding you with 10 free spins at a 3x multiplier, you can trigger the round when you hit three or more Incredible Hulk scatters on any of the five reels.

The second one is a choice bonus, which is triggered by getting the crash bonus scatter on Reels 1 and 5. You then pick cash prizes and a multiplier while gleefully trashing some police cars.

The thing I look out for most is the expanding wilds in this slot when Hulk appears on the center reel, awarding extra re-spins. If you get wilds on Reels 2, 3 and 4 simultaneously then you will get three expanding wilds and one re-spin. This can be very rewarding if the right symbols come up on the remaining two reels.

Playtech's Marvel slots can reach the big heights or end up a damp squib. While slots like Iron Man and Iron Man 2, Blade and X-Men deliver, The Incredible Hulk isn't quite up there. It is, however, a pretty diverting game to play to while away the hours.