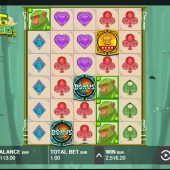 Big Bamboo slot by Push Gaming is going to be volatile, we know that from their previous games like Jammin' Jars 2. We have here a dull green bamboo background with blended oriental music and sound effects with the appearance as expected of a panda on the reels. In effect this game is a combination of their popular Razor Shark slot combined with the upgrade feature seen for example on Thunderkick's Pink Elephants 2 slot. So can we save our bankroll from a painful caning here or will it hang on in the wild like these Pandas have?

On the reels...
We get 5 reels of 6 rows each on Big Bamboo slot with symbols appearing both singly and stacked in many cases and 50 fixed pay lines. Your Golden Wild or Panda is top pay at 150x bet for 5-of-a-kind, then Bull 20x, Monkey 16x, Dolphin 12x with four car suits all at 1x. The Mystery Bamboo symbols can land in stacks anywhere to reveal the same symbol afterwards and we have single Ying Yang scatters on the middle 3 reels.

Golden Bamboo
If the Mystery Bamboo symbols reveal the Golden Bamboo, all incidences of the positions spin as individual reels and can reveal:
Multipliers - up to 10x which will work on all the instant prizes and collectors present
Instant prizes - 1 to 5,000x
Scatters - same as the Ying Yang ones appearing naturally on the middle 3 reels
Collectors - will draw in and combine then empty all the other instant prizes and collectors in view
Gamble Scatter - occurs when a normal scatter is present on both reels 2 and 3 and can only appear on reel 4 or via the Golden Bamboo feature. You will get 4-9 free games or 7-9 with two dots, meaning your first two low-value symbols are removed from the reels in the bonus. You will then get the chance to improve your offer with more spins or the same with more dots for example, but can lose the whole bonus if unsuccessful.

Free Games
Once you commence your 7-10 free games in most cases, you may have started with a dot or dots. Each dot removes a card suit from the reels and turns it into the Bamboo Mystery one. As you do this, a Golden Bamboo value-only multiplier is created at 2x for the first card suit removed, 3x for the second, 5x for the third and finally 10x for all four removed. If you didn't start with any dots present on the triggering spins number, you can upgrade them by getting bonus scatters during the free games. Every 4 collected removes a card suit and will award extra spins as follows: first suit +4, second and third suit +3 and final suit +2. You can still get extra spins too from the Golden Bamboo tiles if one drops the Gamble Scatter in. Once you have all 4 symbols upgraded to Bamboo, you no longer see bonus scatters on the reels and can therefore only get extra spins from the Gamble Scatter. We are told 50,000x is the maximum win here. You can buy the feature in some jurisdictions for 99x bet basic 7-9 spin trigger, 179x for 7-9 with two dots, 300x for a random choice from all 3 (including the full Monty of 4 dots and full upgrades thus instant 10x Golden Bamboo multiplier for a whopping 608x bet!)

Our View...
Big Bamboo slot has a basic 96.13% RTP but using feature gambles in conjunction with bonus buys can go as high as 96.74%. the game is nothing special to look at or listen too with its matt pastel colours and graphics and average sounds. You get nearly all the base game excitement from the mystery symbols revealing the Golden Bamboo as there's little chance of big 5OAK wins. The feature is quite exciting with its huge potential but the caveat there is the fact it is highly volatile and for those colossal multi-thousand wins you'll no doubt travail through many two-figure to low three-figure returns. I've bought a 608x feature and seen it pay 6x stake for example. This bamboo could certainly give your balance a good whipping...