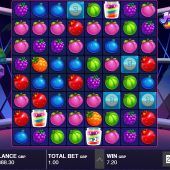 Jammin' Jars 2 slot by Push Gaming is an improvement on their incredibly popular grid game Jammin' Jars. In fact, almost everything issued by this innovative UK developer is popular. From Razor Shark slot with its moving wilds, a very eye-catching The Shadow Order slot and its cascading orbs to their Mystery Museum slot, Push Gaming never disappoint. There is a futuristic recording studio behind the grid, fruit symbols and beat music to play along to and great visuals when things happen, which they do aplenty! So can we see some jammy wins here or will our bankroll be confined to a jar with a very tight lid?

It's a simple mechanic here where you need 5+ adjacent symbols to see a win on Jammin' Jars 2 slot. There is an 8x8 grid of 64 individual tiles and the tops pays are for 32+ in a cluster, winning tiles are replaced by more from above. So let's see these max/min pays for each symbol: Redcurrant 1000/1.5x bet, Pineapple 600/1x, Melon 200/0.2x, Blackcurrant 150/0.2x, Blackberry 125//0.1x and finally Blueberry 100/0.1x. Rainbow Jar Wilds can fall in any position and each time they are involved in a win, their multiplier increases 1x and if more than one, these multiply each other if in the same winning cluster. They also move position between tumbles and we need to see them close together to have a better chance of Wild wins.

The final paying tiles which we never saw on the original version are bet multiplier ones outlined light blue. You need 5+ of these adjacent as with the other symbols. They will display numbers from 1, 2, 3 then 10, 25, 50, 100 and even 1000x on them, plus others in between those amounts. The Wild Jars do substitute for them and will also apply any multiplier they have to the prizes!

Randomly, after any spin whether it was a winner or not, the columns will light up with colour bouncing up and down like a graphic equalizer. This can recede and do nothing, or fill the grid. If it fills the grid, then 1, 2 or 3 positions will darken and grow a similar colossal (except Wild or Cash Prizes) symbol of either 2x2, 3x3 or 4x4. These may or may not join together themselves or via existing matching symbols on the grid but whichever, you are guaranteed a win. Any Wilds in view and their multipliers if applicable will not be covered and will remain active if involved in these colossal symbol wins!

So you need to collect or drop in 3 or 4 Rainbow Jar Wilds in any one spin (see image). You now get 6 free games with those Wilds sticky but moving into random adjacent vacated spaces between each win. They will increase in multiplier by 1x each use and as said before, these multiply each other. They don't reset between each free spin so when you've got say one at 5x, one at 8x and one at 10x that's a 400x multiplier if all 3 count in one cluster. You are hoping they move together before the next spin as when widely spaced, they are not much good. You can have up to 4 in action although it's rare to see more than 3 working in the same cluster. There are no extra spins and the round is capped at 50,000x bet.

Yes, we have another surprise facet to Jammin' Jars 2 slot! Every now and again, a Gold Disc will drop in. It will be collected in a meter under a Giga Jar to the left. You need 20, 25, 30 and 35 discs to climb the respective levels after beginning on 1. You need to fill up 5 levels to activate the chance of a special free spins round when a Gold Disc appears after. When it does, all symbols on the board will drop off including Wilds. The Giga Jar then enters the grid in a random position as either a 2x2, 3x3 or 4x4 Instant Prize symbol. You get 8 spins and can only land Prize symbols or Wilds in the empty spaces which stick in place if forming adjacent connections to the Giga Jar. Some Prize symbols may offer up 1 or 2 extra spins too. When you have used them all up, the Instant Prize collection is totalled, multiplied by any Wilds if applicable and paid! The Giga Jar then resets to a random level of 1-4. This is a rare feature but can be very lucrative.

Once again, Push Gaming have nailed it for the player with Jammin' Jars 2 slot. You have a colourful game, plenty going on, three exciting features including the Fruit Blast modifier and the chance of big wins from any of them. It's easy to watch with gentle music and sound effects that aren't too intrusive and the animations are excellent. Your RTP is actually in a range, 96.40% average but climbs from 96.20 to 96.60% during raising the Giga Jar levels to maximum 5. The modifier is quite frequent and can pay 100x or more and so are the free games which are very volatile, you hit 5x or 25,000x depending on the pre-arranged outcome. The Giga Jar is hugely volatile so don't be too disappointed if you have thousands of spins to activate it and end up with less than 100x, but if it goes right it can be 5-figures. This slot may just about be the sweetest jar of jam you ever tasted...