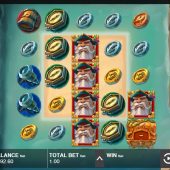 Booty Bay slot by Push Gaming is a welcome release from this reputable developer but at first look I can't say it's one of their best. A cartoon theme of pirates, a background of a Caribbean island with daft music is what greets us here. Like their Razor Shark slot before it and The Shadow Order slot with it's excellent graphics we appear to have another 5x5 game here. I'll be surprised if transpires to be as exciting as their Jammin' Jars 2 slot which I would suggest has been Push Gaming's biggest hit to date. So can we stack some booty on our bankroll here or will it get very stormy in this bay?

On the reels...
Stacked symbols and 5 reels of 5 rows each confront us as we open Booty Bay slot. We see a 3x3 Hotzone in the centre but we'll come to that shortly. For now, we get paid for clusters of adjacent symbols of 6 or more of which there are 3 high, 3 medium and 3 low. The top pays are for 18+ in a cluster and for the high character symbols these pay 50, 25 and 10x, all 3 medium object ones pay 5x and the low coin ones 2.5x. You can land locked or unlocked Booty Wilds anywhere which can have a multiplier overlaid and the modifiers are awarded by special symbols:
Swirling Rapids Symbol - awards a re-spin with any unlocked Booty Wilds moved into the Hotzone which means they get an increasing multiplier for each re-spin they are used in.
Treasure Map Symbol - a simple pick-me is awarded with 6 choices of both cash and enhancements.

Hotzone
In normal play any Wild inside it awards unlimited re-spins which continue while any Wild is still inside it. The wild moves to an adjacent position each re-spin and its multiplier increases by 1x each re-spin if it remains inside the Hotzone.
A Locking Wild anywhere in view locks all Booty Wilds in the Hotzone in place for 3 re-spins while those outside stay unlocked, these Locked Wilds remain in place and all increase 1x each re-spin.
Triple Wild Lock Feature - this is the one you really want to hit. It triggers by having 3 or more Booty Wilds on the grid during any play and you'll mainly trigger it from the above feature. You get 3 re-spins and each of the 3 Locked Wilds increases 1x each re-spin.

Our View...
Booty Bay slot has a good 96.41% RTP and a win cap of 20,000x bet so that indicates the volatility here. Although it's really a hybrid of Jammin' Jars and Razor Shark as the mechanic goes, it can award some very good hits out of nowhere when the 3 Wilds appear and the re-spins carry on for a while too. The general play regarding sounds and animations is a bit tiresome though but if you stick it out you could well hit big as I did when testing it. Drop your anchor in this bay and you could well be earning some booty here...