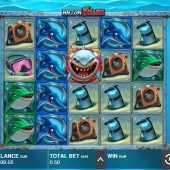 Razor Shark slot by Push Gaming brings a sense of anticipation for me because like Big Time Gaming, Push Gaming tend to release slots infrequently but when they do they are usually noteworthy and offer some high potential and excitement in their mechanic. From the controversial Jammin' Jars to the excellent Blaze of Ra, the average Turn it Up! and brilliant The Shadow Order, this developer usually delivers. Here we get a rather childish load of cartoon fish on thr reels which are set underwater with the obvious bubbling noises as we spin and little else to catch the eye. So will our bankroll be cut to ribbons by these razor sharks or can we swim to safety with at least some of it?

Stacked symbols are immediately noticeable on this 5x4 grid with 20 fixed pay lines and the 5-of-a-kind pays are 50x bet for the Golden Wild Shark, 25x Orange Shark, 20x Pink, 7.5x Green with four items of diving gear Flippers, Camera, Mask and Tank all paying 2.5x for a full line. There are Magnetic Mines on all reels for scatters and as we'd expect from Push Gaming, there are a few modifiers to entice us before the main bonus is triggered.

Mystery Stacks may appear on the grid any spin which will be in stacks of 4 so a full reel is possible although just one can appear. When they do, the Nudge and Reveal starts and any paying symbol can appear or even the Golden Shark Wild. Each spin the Mystery Stack will nudge down one row until it disappears off the bottom of the grid. Each spin the symbol can be different and may or may not produce a win. You tend to see more Mystery Stacks appear while this feature is in progress.

If your symbol revealed is the Golden Shark Wild then you get paid for any wins, then the Wild tiles will spin as individual reels revealing x bet amounts or scatters so you'll get a bit of cash even if the bonus doesn't trigger.

You need 3 Magnetic Mines for this feature. You get full Mystery Stacks placed on reels 2 and 4 so are guaranteed at least 4 spins as they move down a row each spin. You spin until no Mystery Stacks are in view at all. Each time the Nudge and Reveal occurs your multiplier increases by 1x with no limit. Obviously the success of this bonus round is dependent on more Mystery Stacks landing as the round progresses and some big totals can be accrued. When Wilds are revealed, they only respin the tiles for cash multipliers and no scatters can appear.

I wouldn't say that Razor Shark slot is one of the best Push Gaming slots but the idea is original and the mechanic is fine. It's just let down a little by the juvenile appearance even though the sounds are more adult and would have been better alongside some real shark images rather than this cartoon nonsense. You get an excellent 96.70% RTP and the game can be quite volatile due to the large potential in the bonus with its increasing multiplier, but the Mystery Stacks are usually a waste of time in the base game it has to be said. It's all about the free games, so if you aren't landing those then these sharks can really shred and lacerate your balance and very fast too...