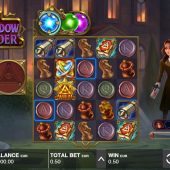 The Shadow Order slot by Push Gaming is another example of a smaller developer not needing to be prolific due to releasing fewer but always notable slots. Push Gaming are possibly most famous for their volatile Jammin' Jars slot and this is hugely popular although not without controversy!  Here we see another grid game with a magical-mystery theme which is compounded by gentle and suspenseful music with reels set over a country house in the night and where the famous Triangle holding the all-seeing eye makes an appearance! Like the Great Albini this slot really has a great look and feel to it, but will the order of the day be to reduce our bankroll to a shadow of its former self?

There are 5 reels of 5 rows each and no paying lines on The Shadow Order. You simply need to land a row of 3,4 or 5 matching symbols either horizontally or vertically anywhere in view to win as all 25 tiles are single. All winning symbols are replaced from above the same as with slots like Perfect Gems and Gonzo's Quest and as with those games you earn a benefit if doing it enough times in one play for which you pay as little as 0.10.

The volatility can be deduced from the 5-of-a-kind pays which are 300x bet for 5 Gold Star Wilds, 120x Gyroscope, 80x Book, 60x Codex Machine, 3 Chess Pieces paying 10, 8 and 6x and 3 lower-value Wax Seals paying 2, 1.5 and 1 for a full line of 5. You will also notice a character to the right of the reels and after her there are 3 more to activate which you do by getting Gold Rings occasionally appearing on the grid and filling a meter of 20 up. When activated, these characters will add their own random in-play modifier to the collection.

Now you will see a Blue, Green and Pink Orb above the grid. 4 actions within one spin will charge the Orbs and drop them down on to the grid and as they are Wild they will increase the chance of making more wins to release the next one and so-on. If you have them in-play, you get a special modifier which kicks in when the winning cascades end with the Orb in view having crossed or landed on one of 3 Hotspots, which are second row down on reels 1 and 5 and fourth row down on reel 3.

Blue Orb - destroys low-paying symbols allowing more to drop down.
Green Orb - 3-6 Wilds added to grid in random positions.
Pink Orb - holds the highest-paying symbol on the grid and gives cascades until no more of the high symbols drop.

As said, there are 4 characters and you start with the Lady Spy. Their respective random modifiers can occur after any game round.

Character 1 - fully charges the Blue Orb and clears the top row allowing it in.
Character 2 - converts all the low-paying symbols into the highest symbol on the grid.
Character 3 - adds a Wild to each column.
Character 4 - removes all low or mid-pay symbols and does a cascade without them.

You need to see all 3 Orbs drop down the grid and leave via the Metal Gate in the bottom right position, known as the Collection Tile. You get 5 free spins and all 3 Orbs above the reels are now fully charged and will drop as soon as a win occurs and remain in play on the grid. A free spin lasts until no more winning actions occur during it, and all 3 Orbs may activate their modifier during any spin, more than once if they traverse more than one Hotspot. You can earn 2 extra spins if all 3 Orbs get to the Collection Tile and you'll then get a multiplier added for each of them, so after first 2 extra spins you'll be on 4x, the second 2 extra spins on 7x and so-on. This gives you an idea of the large pays possible and Push Gaming have limited the maximum pay to 24,205x bet for the benefit of the overall pay-out structure and RTP spread.

The Shadow Order slot is quite a game, with a great overall appearance, good graphics and animations alongside a really nice soundtrack. We also get the expected high win potential typical of their recent releases and the bonus round is really absorbing. Win frequency isn't high in the base game so you need to wait for those Orbs to drop in order to get some lost credits back but this shouldn't be an issue, especially if the Character Modifiers are happening for you too. RTP is 96.51 to 96.98%, as it increases very slightly each time the characters are unlocked but a large part must be in the bonus in order to fund those crazy wins possible here! I will certainly order another visit to this shadow...