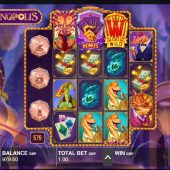 Dinopolis slot by Push Gaming is the latest edition from this purveyor of high-volatility slots although with slightly more potential than its predecessors. The only one beating it I can see is the popular Razor Shark slot while Wheel of Wonders slot and the really inventive Shadow Order slot come in with a less extravagant limit. Your theme is some rather silly dinosaurs in cartoon form although this can be blamed on the inspiration source, old children's shows by the look of it. The music is a little trite and sound effects rather weak although in keeping with the overall look but we get some reasonable animations here. So can we get a roaring raise for our bankroll here or will it see a quick extinction event like the unfortunate dinosaurs?

You don't have fixed pay lines here but 576-ways over 5 reels set out in a 3-4-4-4-3 grid on Dinopolis slot. Symbols appear stacked and single with the 5-of-a-kind pays ranging from 10x down to 1x bet for the six Dinosaurs and Cards, Dice, Notes and Chips offer us the lower pays of 0.5x for a full way. You have stacked Brachiosaurus Wilds on the centre 3 reels which can offer up 1,2 or 3x multipliers thus 27x is possible and Coins can appear on reels 1&5. You can only get paid these coin values, ranging from 1-1000x stake, if Wilds link them up so only 3 to 5OAKS are possible with reel 1 having Coins and Wilds on reels 2 and 3 or better. Your final symbol is a scatter formed of a hand with cash, on the middle 3 reels.

You need to see those 3 scatters to trigger a pick-me to decide your feature enhancements. You get the first pick to select one of these:
Sticky Brachiosaurus Wild - this will have a 2x multiplier and be placed on the reel from 2,3 or 4 which it was allocated.
After a retrigger, or if you pick the Gold Card from the first choice after the initial trigger, you can get these:
Single Reel Multiplier Boost - will add 1x to one Wild in view.
All Reels Multiplier Boost - same as above, but adds 1x to all Wilds present.
Gold Card - awards 2 extra picks and is the one you really want. You can only get this after a retrigger if it never came up first time round after the initial trigger.
You then choose free games quantity which will be 5+ and there is now the chance of retriggers awarding 1-5 more spins plus a Booster as described above. You earn these via collecting highlighted coins in the free games on reels 1&5 and filling the meter on the right of the reels. Each level needs 5 coins and you don't get any more coins appearing on those reels after level 5 is reached. The sticky and stacked Wilds can reach maximum 7x in this bonus so 243x multiplier is possible for some colossal hits, 50,000x is the limit.

Dinopolis slot is certainly not Push Gaming's best in terms of graphics and theme but as usual this developer stretches the boundaries with excellent slot maths and mechanic. You get a good 96.40% RTP, occasional big hit in the base game via the Wild reels and sometimes the Coins feature. The free games bonus is where the real thrill arrives for the player as it's rare to get bad results and should you hit the 4th. or 5th. level you should be counting on 4-figures times stake most of the time. The bonus is very volatile of course as it comes in frequently enough so the average pay isn't huge. Then again, you could get an absolutely Brontosaurus win here...