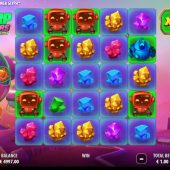 Warp Wreckers Power Glyph slot by Quickspin has an otherworldly appearance in a cartoon way with equally silly music and sound effects. The reels sit over an illustration of a planet's surface with comic book symbols and characters here. There's touches of the recent Cabin Crashers slot here regarding the characters and its namesake Ghost Glyph slot but really it's an attempt to emulate the Play'n Go cascade grid slots like Moon Princess slot and all the rest. So can our bankroll go into warp mode here or will it really be wrecked altogether?

On the grid...
We have 25 individual tiles in a 5x5 grid and need 3,4 or 5 horizontally or vertically anywhere to win on Warp Wreckers Power Glyph slot. The 5-of-a-kind pays are Wild or Power Glyph 50x stake, Grabber Robot, Jetta or Unit Robot 10x, any mixed Robots 5x with five Crystal colours at 4, 3 or 2x for a full line of 5. Any 3 or 5OAK Crystal wins produce a Wild and 3 or 5OAK Robot wins a Power Glyph. You naturally have in-play modifiers as with the Play'n Go 5x5 games and like them, no replacement symbols tumble in but every win adds 1x to the game multiplier and this resets to 1x for the next spin.

Power-Ups
Each spin, a meter of 4 Power-Ups in random order is to the left of the grid called the Power Stack. Every time a Power Glyph is part of a win it will activate one of them. When there are no more wins all activated Power-Ups are applied one after the other.
The Transformer - selects a symbol on the grid and transforms it into another type.
The Eraser - selects a symbol and removes all incidences from the grid.
The Warper - selects random symbols and turns them Wild.
The Bomber - drops new Wilds from above into random positions.

Free Games
You need to totally clear the grid in one play (except Wilds) to trigger 6 free games. You now get a new modifier added to the end of the Power Stack, The Destroyer, which if activated adds a 2x2 Wild in a random place adding +1 spin as well. A full clearance adds +3 extra spins too and finally the multiplier doesn't reset between spins as you may have guessed. We are told 4500x bet is feasible.

Our View...
I have to say this Warp Wreckers Power Glyph slot game is no better or worse than any of Play'n Go's versions and that developer is the master of them. In fact, I thinks it's less aggressive and annoying with gentler sounds and graphics along with the animations so it's not tiring for longer periods of play. PnG always claim 5,000x is possible on their 5x5 grids yet I have never seen a win over 2000x recorded, 1500x is considered huge by players. In this case as I said, Quickspin boast a lower maximum pay which I'd suggest therefore is more realistic than the claims of their Swedish rivals at PnG. You can get some decent hits in the base game here via the constant multipliers after 2 hits or more but the bonus is harder, far harder to achieve! When it comes, it's the usual feast or famine scenario and the big hits always rely on you getting that final Power-Up the Destroyer and its 2x2 Wild! Yes, we get a time warp mechanic and theme here but it may not damage your balance as the name suggests...