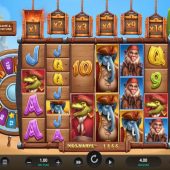 Wild Buccaneers Megaways slot is developed by FourLeaf Gaming and is offered via the Relax Gaming platform. Relax haven't made many Megaways but one decent one was The Great Pigsby or the more quirky Megaways Respin slot, and this latest one has many features like Genie Jackpots Megaways by Blueprint Gaming does. The appearance isn't great with cartoon characters dresses up as pirates with the odd daft soundbite thrown in for good measure to augment the nautical background. So will our bankroll be walking the plank here or is their plunder to be had?

On the reels
You get 2-7 rows on the 6 reels of Wild Buccaneers Megaways therefore 64-117649 ways per spin which costs 20 coins. The best 6-of-a-kind is 50x for the Purple Tiger down to 0.8x for the lower card values. Wilds can appear singly on the middle main reels and Green Scatters on all six. The symbols can be stacked and single and some overlaid with a gold coin but the first thing you might notice is the boxes over each of the six reels, called the Treasure Trail which is responsible for the in-play modifiers.

Treasure Trail
There's a 1x multiplier in the box above reel 1 so nothing actually happens, but on the second tumble in the same spin there will be a 2x multiplier which then applies to that winning tumble, the next tumble opens the next multiplier box which will apply to that win. You may see a Wild in a box which will expand down the reel or if a free spins scatter is in the box you open it triggers the free spins instead of needing to land the 4 scatters. You can bet 50% extra for Lucky Spins which will offer up more Wilds and overlay coins, more scatters and higher multipliers in the boxes over the reels.

Super Spinner
This is a randomly triggered wheel feature which can occur only whenever a gold overlay coin is collected to the box on the left of the reels. The prizes are cash from 80 to 5000x stake, 10 to 25 Lucky Spins as described above, 8 to 14 free spins or finally a prize of 10-25x stake plus entry to the Fortune Maker feature. If allowed in your jurisdiction it can be spun for 60x bet without a random trigger.

Free Spins
The 4 scatters or scatter chest above the reels will earn you 10 but you can gamble them on a wheel for a maximum of 22 and 5 if losing the first gamble. In the Wild Buccaneers Megaways free spins the multiplier above reel 1 on the Treasure Trail goes off the left when used, then it's replaced by the higher one to the right of it unless a scatter (+2 spins) or a Wild. The reel 1 multiplier remains the same each spin until used and the other 5 chests vary each spin, multipliers randomly allocated in ascending order left-to-right and can display amounts like 45 or 38x for example. The Wild still expands if opened. It's in effect an increasing multiplier bonus but with irregular rises!

Fortune Maker Feature
This can only be gained from the Super Spinner wheel and you get up to 25x bet to gamble on a picks feature. There's 16 boxes of which 4 contain skulls which kill you and take all money won up to that point. You get 12 steps of true odds for each of the picks remaining. It's 1.3x your money first winning pick for example and revealing all 12 scatters with 12 picks and missing all the 4 skulls, your money is multiplied over 1800 times! You can walk away after any winning pick.

Our View...
Wild Buccaneers Megaways slot has a 95.00% RTP and is one of the better MW games ever made. The maximum pay is 50,000x bet and all features whether free spins, picks round or Super Spinner cash can pay thousands times stake. The game isn't a classic aesthetically although it's not bad looking and sounding to be fair. You can buy free spins for 90x bet in some locations too. The increasing multiplier in the base game for the second tumble onwards is nice and for once I must say that pay the premium 50% on stake may actually be worth it. You'll need not a little luck to actually hit one of the big prizes but we know that on Relax Gaming slots it can and does happen. This game could be a profitable bit of piracy for you...