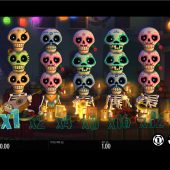 Esqueleto Explosivo slot serves up 5 reels and 17 paylines with the theme being all about the Day of the Dead festival, celebrated each year in countries like Mexico. During this game, players will observe a set of mariachi band players, each with a tower of brightly coloured skulls on top of them. As you spin the reels, the heads cascade down, with winning symbols exploding and being replaced by new skulls that drop into position - think NetEnt's Gonzo's Quest mechanics and your are not far off.

There is no free spins feature in this slot. However, you will be able to benefit from cascading reels, win multipliers and wild symbols that accumulate with each consecutive win in the same spin. This means each winning spin has the potential of building into a really nice payout. Thunderkick's Esqueleto Explosivo offers an RTP of 96%, making it very typical for an online slot.

Despite the lack of an obvious bonus feature, Esqueleto Explosivo ticks a lot of boxes for me. The presentation is really cool, as is common with Thunderkick slots such as Flame Busters, Jaguar Temple and Luchadora. The game mechanics give you lots of chances to win big, without the typical bank roll squeeze of many online slots. I would actually describe this slot as an old mechanic, that has been reinvented, offering a modern twist. Fans of this particular theme should also check out IGT's Day of The Dead and Play'n Go's Grim Muerto.