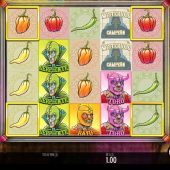 Luchadora is the name given to an exhibition wrestler, particularly popular in Mexico, but also seen in some other Spanish-speaking countries. They can be men or women and are known for usually appearing masked when fighting in their brightly coloured costumes in this popular spectator sport. Slot game developer Thunderkick have turned the theme of Mexican wrestling into a slot along with the expected Latin-style trumpet and acoustic guitar music to accompany the Luchadoras in their colourful contests. You may be reminded of Play'n Go's Grim Muerto or Elk Stuidos' El Torero here. In this game they are all prefixed 'El' so we know they are all men, but what do we find when grappling with this slot?

We have 5 reels, set of 4 rows with 30 pay lines altogether. All the icons appear stacked and the four corners of the grid are highlighted as any of the Luchadors landing in them will transform themselves into Wilds plus any others in view for that spin. You have 4 different-coloured wrestlers which are the highest-paying icons - El Toro, El Rayo, El Serpiente and El Pantera which as you may know if familiar with Spanish translate into animals i.e. The Bull, The King, The Snake and The Panther. They pay 25, 20, 17.5 and 15x bet respectively but all will pay 25x bet if one of them has landed in a corner and turned their 5-of-a-kind Wild. There is also a greyed-out stacked mystery symbol which pays 5x bet for 5 and its importance lies in the Lucha Bonus spins as we will see.

There are no card values but instead we have different-coloured chillis and peppers paying 2 to 3.5x bet for the 5-of-a-kind. As said, all paying symbols appear stacked and that goes for the Wild too on all 5 reels which pays 25x bet for 5 and is separate to the transforming Luchador Wilds. Aside from the scatters to trigger the free games, there is a single unique Lucha Smackdown bell symbol which rarely appears but when it does will award 2-15x bet or 7, 11 or 15 free games - it basically performs the same as the chest symbol in Yggdrasil's Vikings Go Berzerk slot and if landing in the free spins you will be given one of the cash amounts as in the base game or 2 to 7 extra spins.

Either from the Smackdown Bell or landing 3, 4 or 5 Lucha Bonus scatters you can get 7, 11 or 15 free games. There is a good enhancement - when a Luchador appears in a corner, instead of just transforming to a Wild for that spin, it becomes a Wild for the rest of the round. Now if you get all 4 Luchadors turned Wild, the mystery symbol then introduces the female element of the game - it will become the La Luchadora icon, the flame-haired lady wrestler and this offers the maximum pay of 25x bet for 5-of-a-kind. This round can be lucrative and you know that it going to pay well usually by getting extra spins or a retrigger.

Luchadora slot has a unique theme and the graphics and soundtrack, while competent, are nothing special it has to be said. The game drops in decent wins quite regularly and is good fun plus has a decent 96.20% RTP too. It's always good to have an in-play feature while awaiting the bonus, which seems quite hard to trigger so that's just as well in this case. The annoyance of maybe getting cash and not free spins when the Lucha Bell comes in is nullified by the fact that you are guaranteed the free games when the scatters appear, that is where the game's potential lies, especially if releasing La Luchadora into the contest although her appearance is rare unless getting some extra spins. So would you get into the ring with a Luchadora?