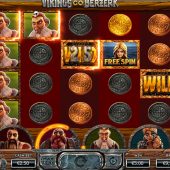 Vikings Go Berzerk is based upon another Yggdrasil slot 'Vikings Go Wild'. There are 5-reels and 4-rows with stacked symbols which is just as well as bizarrely for this format there are only 25 paylines. The top symbol pays 10x stake down to 1.6 for the lower-value coins. There are single wilds on all reels and of course, scatters. The game has a soothing musical background that belies the aggressive tendencies of Vikings on a Berserker! The term derives from the Old Norse 'Bear Sark' which were the bearskins Viking warriors wore when on the attack fuelled by 'Alu' (ale in English) and terrified the poor old Anglo Saxons, hence 'on a Berserker' or 'going berserk'!!

It is prudent to start with the treasure chests on reels 4 and 5. The one on reel 4 offers up 2-40x stake in cash or 7, 14 or 21 free games in base game mode. During free spins it offers the same cash win but also 1 extra sticky Wild, a Wild reel or 2-4 extra free spins.

The treasure chest on reel 5 is Golden and in the base game offers 10-400x stake in cash, 7, 14 or 21 free spins or the Ragnarok free spins. Should you hit the Golden Chest during the free spins you get the same cash values, 2-4 extra spins, a Wild reel or 2 extra sticky Wilds.

There are 3 ways to trigger the free games of which you get 7 for 3, 14 for 4 and 21 for 5 scatters, or the treasure chests as explained above or lastly the cumulative 'Rage' meters underneath the reels. Every time you hit a win involving those 4 characters their meter moves and when full it triggers 7 free games with that character in 'Berzerk Mode' - in other words when they appear during the free games they will always win a battle with the Siren and turn into sticky Wilds for the remainder of the free games.

Before the free games begin a bar will move and randomly stop giving a reward for the spins equivalent to one of those contained in the normal (not Golden) treasure chest i.e. extra spins, or start with one sticky wilds etc. The potential is there for some rewarding bonus rounds, as say you started with a Wild reel bonus and hit the treasure chest in the games and added another one, you could really loot the poor old Saxons! No retriggers available due to the sticky Wild format.

Vikings Go Berzerk slot is imaginative and has a decent RTP of 96.10% with smooth graphics and a low irritation factor in the sound effects. You must be aware that the 'Rage' meters move very slowly as 95% of wins involve coins and not the respective Viking characters so don't expect to fill one up or attempt to play until you do! That said, the bonus triggers quite easily on the reels but like the treasure chests it is rare to find a very good outcome; every feature I attained paid between 15-25x stake although the potential is there for hundreds and the treasure chest must have been looted before I got there as in 40 attempts I had 1x 7 free spins and 39 cash prizes of 2-10x stake. Other Viking-themed slots that are also worth checking out include Play'n Go's Dragon Ship or the WMS slot Viking Vanguard.