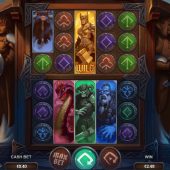 Age of Asgard slot by Yggdrasil delivers us an appropriate Viking theme for this Swedish developer. This isn't the first time we have seen the theme, as Vikings Go Berzerk was a popular release back in 2017 and we had a sequel to that, Vikings Go Wild as well as Trolls Bridge and it's own sequel in 2019 of Trolls Bridge 2. This game looks very different though with powerful classical music playing and two reel sets in a carved wooden frame set over a spooky-looking Viking encampment. So will Age of Asgard slot actually guard our bankroll, or will it be a case of rage of Asgard?

The first unusual feature is immediately apparent as we appear to have two 5x3 grids here on Age of Asgard slot, one above the other. We have 40 lines and pay 40-coins to play with both stacked and single symbols possible. There are 20-lines on each slot and the 5-of-a-kinds are Freya or Dragon 6x stake, Valkyrie or Warrior 5x, Maiden or Blue Warrior 4.5x with eight coloured Runes at 2x or 1x for a full line. The symbols are split between each slot so 3 of the 6 character icons appear on each grid as does 4 of the 8 runes. You get Free Spin scatters on both grids which can appear on the centre 3 reels. Stacked Wilds can appear anywhere and they can bring their very own bit of action to this battle!

On either grid a Wild can nudge randomly to fill the whole reel which will award a free respin. If though, you fill the same reel of both grids with a Wild, you will get a Clash. This means 2-4 single Wilds will be randomly placed on the reels adjacent to the stacked one(s) and any landing on character symbols will become expanding Wilds too for that spin. You will still get a respin afterwards with just the Wild reels retained, not the random Wilds.

You need to land scatters on either grid on the centre 3 reels for 10 free games. You then play on one 50-line grid over 5 reels of 6 rows each. Your stacked Wilds can still randomly nudge to fill the whole reel of 6 rows and when they do you get the randomly-placed 2-4 Clash Wilds and a free re-spin afterwards. There are no retriggers.

Ragnarok Spins - these are triggered when you land all 6 scatters over both grids. They are the same as above but you get 20 spins instead with only the 3 premium character symbols plus the Wilds possible on the 6-row reels! If you got 5 scatters you get a Randomizer Wheel which will award either the 6th. scatter required or 1000-coins, and I'll let you guess which it almost always chooses, because the Ragnarok spins can be very profitable.

Age of Asgard slot has the usual high quality Yggdrasil graphics, sound effects and especially animations although I feel the maths here are quite similar to Vikings go Berzerk. We get a 96.20% RTP which is solid and typical for their games and some reasonable hits in the base game when the Wilds are being kind. The free games aren't easy to trigger and have significant potential despite the quite low line-pays but you'll wait ages for the rewarding Ragnarok type! Asgard is well worth a visit, but his sword can soon slice through your balance...