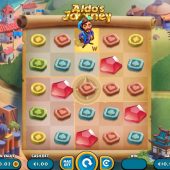 Aldo's Journey slot by Yggdrasil Gaming has a fantasy adventure theme centred around Aldo who appears to me a medieval Robin Hood-type figure. We get gentle old classical music and the reels are on an opened parchment scroll over a coastal cartoon background of a beach and rolling hills, presumably where his journey begins. We have had a few previous releases of this genre, such as Ash Gaming's Adventures in Wonderland and the jolly decent Adventure Palace by Microgaming. The former was well received and Ash Gaming then released Adventures Beyond Wonderland, so what treasure does Aldo seek here to add to our bankroll?

Rather oddly we get 65 pay lines on Aldo's Journey slot over a grid of 5 reels of 5 rows each. You pay 50 coins to play and the 5-of-a-kind pays are quite low to begin with, with Red, Pink, Blue or Green Gems paying 2x bet and 4 card suits all paying 1x, so quite a simple structure. You get Compass scatters to trigger the bonus and a standard Wild tile on the reels too, but there is more to this than meets the eye!

You'll have noticed Aldo on a tile which moves about the grid each spin. he is a Wild too and there is a Compass under the central tile on the grid. Should Aldo land on that, you get 3 to 9 Random Wilds added to the grid plus a 2, 3 or 4x multiplier applied.

Except for Journey mode, if the Journey Wild lands on the centre compass square you get the 3-9 random Wilds as in the base game, but a 1, 2 or 3x multiplier will be added to the round and applied for the remaining spins.

Aldo's Journey slot is slightly juvenile but very well thought out and fun to play, with each free games mode being capable apparently of delivering up to 3,000x bet according to Yggdrasil. The standard of graphics, animations and sounds is high here and the RTP is the standard 96.10% which most of Yggdrasil's games have. The Journey Wild can make those low line pays significantly better int he base game but your real chance of winning big is effectively confined to the bonus. I say it may well be worth packing you bags and joining Aldo on his adventures...