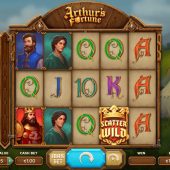 Arthur's Fortune slot by Yggdrasil Gaming takes us back to medieval times as we view a knight's encampment on a grassy hill beneath his castle and hear the obligatory soft lyre music of the era. The legend of the famous king has permeated through many of the slot developers as we have seen with Quickspin's Mighty Arthur slot which is quite a decent game as is Netent's Excalibur slot or if a seasoned play you might have tried Microgaming's volatile old classic, King Arthur slot. Now, with his castle surrounded by an army of knights, how likely is some of Arthur's fortune to add itself to our bankroll?

You play 20 lines here on Arthur's Fortune slot on a 5x3 grid where the lower symbols can appear stacked. The 5-of-a-kind pays are 27.5x for the Wild or Scatter Wild (we will get to these shortly) then 12.5x Arthur, 10x Princess, 7.5x Knight, 6.25x Earl, 5x Prince with five card values of 1.75 down to 1x for a full line of 5. You get a Wild Scatter which appears on all 5 reels and a special bonus symbol which can appear on reel 5. There is more to this than meets the eye though.

Randomly after any spin, a wheel appears above the reels and one selected symbol will turn gold and become a Wild on the reels. The wheel spins again and can eventually select up to all 10 standard symbols to be transformed into Golden Wilds, but usually 2 to 4.

As with many Yggdrasil slots you get a special scatter on reels 5 which can appear in the base game and free games. When landing you will be awarded after a reveal either 7 free spins, up to 500 coins which is 25x bet or 1 to 3 symbols on the grid will turn to Golden Wilds as described above. In the bonus the options are up to 1000 coins or 1-14 extra spins.

Landing 3, 4 or 5 Wild Scatters will earn you 7, 10 or 14 free spins with 1, 2 or 3 symbols converted to Golden Wilds respectively. If you land 2 Wild Scatters in the bonus you get 1 extra spin and one more symbol converted to a Golden Wild. If you land 3 Scatter Wilds you get 2 extra spins and two more symbols converted to Golden Wilds, 4 earns you 3 of each and 5 will get you 4 of each and a colossal win presumably! Yggdrasil proclaim we can win up to 10,850x bet on Arthur's Fortune.

Arthur's Fortune slot has the usual high standard of graphics, sounds and animations we expect from this developer along with their standard RTP of 96.20%. The base game is pretty dire for paying unless hitting the Arthur's Gold or Merlin's bonuses and the free games also tend to get triggered from Merlin's bonus. These are pretty volatile and unless seeing the retriggers and extra Golden Wilds, you'd be lucky to exceed 50x although the potential is always there. At least they occur frequently enough though. I did quite enjoy my stay with Arthur's band of knights...