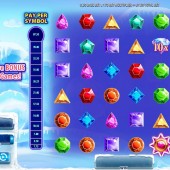 There are some slots out there that can sometimes breach the lines between being a slot title and being an arcade game title. The cult classic Bejeweled by IGT is one example and the more recent Max Damage and the Alien Attack by Microgaming is another.

This Cool Jewels slot from the magical minds of WMS Gaming is another slot that dips its toes into other genres of gaming but just about holds the slots format as its foundation. There are no reels as such with the symbols set up on a 6x6 grid. However, the symbols do spin into place like they would do in a slot game. There are also meters on either side of the grid. The meter on the left determines how much each symbol is worth in terms of a pay out and the meter on the right shows how many free spins are available. When getting ready to spin, you will have the chance to add a bet multiplier up to a value of 400 so you are in full control of how much you play this slot for.

Hello? Candy Crush Saga? Is That You?

Symbols on the reels consist of various coloured jewels. In that sense, that is where it does feel very much like Bejeweled. Fans of the mobile app Candy Crush Saga will also be familiar with the visual side of this slot. The jewels come in the colours of green, blue, red, orange, turquoise, pink, and yellow. You must try to complete a combination of four of the same symbol to earn a win. There are also 10x Multiplier symbols and if you complete a combination that includes that symbol then your winnings will receive a 10x multiplier.

Cool Jewels has a Cascading Reels feature which is always popular with slots players. This means that certain symbols, in this instance the Exploding Wild symbols, have the power to destroy certain symbols leaving gaps on the reels. These gaps will then be filled by new symbols dropping into the space left by the destroyed symbols allowing for the possibility of new winning combinations to be completed.

Watch Out for the Exploding Wilds

There are three different Exploding Wild symbols on this slot. The Shocking Wild destroys every symbol either side of it diagonally resulting in the remaining symbols on the reels dropping down into the vacant spaces left by the destroyed symbols to potentially create new winning combinations. The Exploding Wild simply destroys all symbols around it allowing potential new winning combinations to be created in the spaces left. Then there is the Blasting Wild and this symbol destroys all symbols vertically and horizontally to its position right along the reels. Once again, symbols drop down to fill the spaces left by these destroyed symbols to open up the possibility of triggering new winning combinations.

Cool Jewels is basically WMS Gaming's answer to Bejeweled. It has the same feel, the explosive Wilds allow for the same kind of Cascading Reels feature to occur and then there are free spins to be had just to add a bit more weight to the mix. Personally, I found it fun and enjoyable but I did feel like I've been here before. If they do a sequel then they might need to add another bonus feature or two just to distinguish it from its Bejeweled-esque rivals.