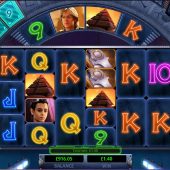 Stargate Megaways slot by Scientific Gaming (or Light & Wonder as they are now known!) is a licensed theme based upon the 1994 Sci-Fi Stargate film. This means we have the classical music, sound effects and characters from the movie as our scene with the Stargate itself behind the reels. It's not the first trademarked theme for a MW slot, we've seen Skywind's ALIVE! Megaways and SG themselves had Beetlejuice Megaways a while ago, closely followed by StakeLogic's The Expendables Megaways slot. So can we get some cosmic cash added to our bankroll here or will the great voids of space claim it?

On the reels...
We have 2-7 rows on each of the 6 reels including the top wheel of 4 individual tiles over the middle four of Stargate Megaways slot. Wilds can appear on the top wheel only and you don't get scatters as modifiers and features are triggered progressively by means of tumbles within the same play. Your pays are Virtual Female 10x bet for 6-of-a-kind, Captain 4x, Scientist 2x, Gadget or Pyramid 1.5x with six card values of 0.8 downt o 0.5x. Your random modifiers for reaching position 5 on the tumble meter on the left are:
Random Wilds - up to 6 Wilds added on reels 2-5
Expand Reels - maximum 117649-ways created
Wild Reel - turns a reel Wild from 2-5
Mystery Symbols - maximum 10 symbols will be overlaid with the Stargate to reveal the same paying one.
Regenerate - clears screen for replacement symbols

Free Games
You need to need to reach 7 on the tumbles scale for 5 free games, 8 for 6 and 9 for 7. Before you begin, you pick 7 times from a grid of 15 Stargates to reveal either blanks or modifiers which will apply throughout the round. You can get:
Extra Spins - 1-25 additional spins.
Win Multiplier - this will be applied to wins. throughout, if you pick two or more they are added together, 5 or 6x will be the most you'll likely see if two are revealed.
Ways Increase - each spin guarantees more ways than the last until max 117649-ways are reached.
Reincarnate - you get an Eye of Ra symbol added to reel 6, when it lands it will reset your free spins back to original amount.
Cash Prizes - between 5 and 100x stake, banked before the spins start.
Wild Gates - more Wilds in top wheel of 4 symbols.
Expanding Wilds - any Wilds on top wheel will expand.
You can buy the features in some jurisdictions at 31.5x bet for the stage 5 modifier trigger, 45.5x for stage 7 and 5-spin trigger, 72.5x for stage 8 and 6-spin trigger and finally 123.5x for stage 9 and a 7-spin trigger.

Our View...
Stargate Megaways slot has a RTP of 96% although it will be 96.13-96.89% if you only use feature buys. The base game won't pay much due to the low symbol pays, even with the best of modifiers. The sounds are graphics along with animations are superb as you'd expect from a licensed them game too. The feature isn't that hard to trigger as you can tell by the bonus buy prices here, the stage 5 modifier often triggers the basic free spins bonus. It's really a case of Megaways meets Netent's Secret of the Stones mechanic - pick right before the spins start, say with a multiplier, expanding Wilds, increasing ways and extra Wilds then there is some not inconsiderable potential here. Your win is capped at 250,000 but that pertains to the maximum 10.00 stake so you could get in excess of 25,000x bet on a lower stake which would most likely occur with the bonus modifier combination I mentioned above. Would you reach the stars with your money here? Possibly, but it could well be a long journey...