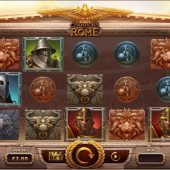 Champions of Rome slot features a stunning backdrop of a Colosseum and stage where to some dramatic music gladiatorial combat ensues on the reels alongside clashes of swords and shields. Yggdrasil have made this theme as gritty as they did with Vikings Go Berzerk and it's far more realistic than we see on other Roman slots such as WMS' Roman Chariots or Blueprint's Rome Rise of An Empire. The sinister music here doesn't do much other than to suggest our bankroll is in great peril as we throw it into the arena here, so how can we emerge victorious from this epic battle?

We start on Champions of Rome slot with 20 fixed pay lines over 5 reels of 3 rows each. Symbols are single with the 3 Gladiators awarding the best 5-of-a-kind wins at 60x bet for the Red, 55x Green and 50x Blue. The medium icons are the Gold, Silver and Bronze animal carvings at 6, 5.5. and 5x respectively and there are 4 coin colours all paying 1.5x. There are free spins scatters on all reels and if you should land all five you'd earn a massive 600x bet as well as triggering the feature. You don't get Wilds as standard symbols but there ways to see them quite regularly.

If you land 2 scatters and don't trigger the main bonus, you will receive one of 3 different Wild enhancements:

If you see 3 or more scatters in view you get an interesting bonus which cannot be retriggered. You can opt for Training Mode for 8 free games whereby anything you win in the bonus is kept. On each spin one of the Gladiator Features above will be chosen and applied.

You can opt for Deathmatch Mode too and here you can choose from 7 spins at 2x multiplier, 6 at 3x or 5 at 4x. The risk is that if you don't win 450 coins or more during the Deathmatch you lose your winnings and get a consolation of 2 to 10x bet OR 5 Training Mode spins. During Deathmatch mode each spin has a random Gladiator Feature applied and only that colour Gladiator will appear on the reels as the top symbol.

In all cases, a Beast can appear on the grid and if one of the Gladiator Feature Wilds land over it, you are awarded one extra free spin.

You can also use a feature purchase option to buy the feature for 100x bet.

Champions of Rome slot is a good idea and comes with the good quality graphics, sounds and animations we have come to expect over the years from Yggdrasil. The RTP is 96.40% but again we have the issue with feature buys here. I paid 100x bet to buy the feature in testing and choosing the 4x multiplier spins in Deathmatch mode and on 9 consecutive occasions failed to hit the 450-coin pay threshold and was 'rewarded' with 3x bet on six of them and 2x bet on two and 5x bet on one! The tenth feature paid 212x so doubled the cost on just one occasion from ten.

This is a terrible way to play the game but the base game is pretty poor when you aren't landing the feature trigger naturally, and even with all the extra Wilds in the feature I never saw any win of 5OAK Gladiator symbols. I will never go here to see my money put to the sword again...