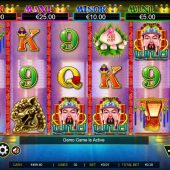 Jade Emperor slot is another Ainsworth 'King Strike' game where after the usual 5 reels and 3 rows screen you have a sixth single reel which can show a King's Crown, the significance of which will be explained later. It joins Big Thunder in this regards, which is not only a King Strike game, but was also originally released in land based casinos. There are 30 pay lines and you have the almost obligatory Chinese theme with dragons, statues and urns. At least you aren't troubled by the usual Chinese pipe and cymbals music as the slot only has a basic start sound effect and one when you get a win.

Is there value to this gem?

The best 5-of-a-kind Golden Dragon pays a mere 6.67x stake down to the lowest card symbol the 9, at 1.33x stake. You do however have stacked Emperor Wilds on the last 3 reels and they land very frequently so don't panic about the low pays! The game has 4 levels of jackpot too: Major, Maxi, Minor and Mini. You need to hit 5-of-a-kind wins with no Wilds included to get the higher two jackpots.

Landing 3 or more Temple scatters triggers 10 free spins. There are no retriggers but 2 or more Temples will add 5 extra spins to your total. During these the benevolence of the Emperor is apparent as he fills the whole of reel 5 and appears more on reels 3 and 4. Due to the Wild reel 5 you cannot win the Major and Maxi bonus in the free games as obviously you cannot avoid a Wild in any 5-of-a-kind win!

Jade Emperor is an interesting slot as long as you don't mind a sizeable chunk of the RTP being allocated to frequent jackpot hits. The actual RTP for this slot is 94.41%, which isn't bad, but there are much more rewarding slots out there. The game in general has low pays, more commonly experinced on a 243 or 1024-way game with stacked symbols, which is a little disappointing for this 30 line game. That said, wins are very frequent due to the Wilds stacked on the last 3 reels and the bonus round is quite easy to trigger and get extra spins in. The real attraction may be if your casino has the game linked to a pooled jackpot network, then you may really land the Emperor's gold...