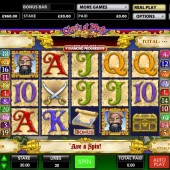 Punters love a good old pirate-themed slot and developer, Ash Gaming, have delivered such a slot in the form of this 5-reel, 20-payline slot called Chests of Plenty. You pretty much know what you’re going to get from this slot from the name and style of the logo alone.

There are an array of pirate-related symbols on the reels including both a male and female pirate, a parrot, cutlasses, treasure chest and treasure map, along with the mandatory 10-through-Ace symbols.

Aaargh! The Female Pirate is Wild!

Shiver Me Timbers! Find the Treasure to Win up to 2,000x Your Stake

Yo! Ho! Ho! Open the Treasure Chests to Match the Gems and Reveal a Prize

Reveal the Diamonds to Win the Progressive Jackpot!

Chests of Plenty is one of the more renowned slots on the market mainly due to its reputation for creating instant big winners with its diamond progressive jackpot. It is certainly one of the more prolific Ash Gaming slots and I would play this over a slot like the horseracing-themed Nags to Riches slot.