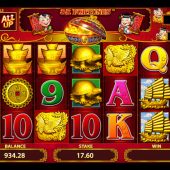 Lucky numbers, lucky colors, lucky symbols, it must be another slot targeted at Chinese players. We’ve seen it time and time again, from slots like Aristocrat’s Double Happiness to Konami’s China Shores and now the online version of Bally’s 88 Fortunes. To be fair to Bally, 88 Fortunes has been around as a land based slot game for many years and has obviously proven popular enough to re-engineer into an online slot, but it follows a well worn path.

Plenty of lucky elements in this one

This slot is a 243 payline, 5 reel game with tiered jackpots to boot. From the red background to the golden symbols on the reels, 88 Fortunes is designed to look and feel lucky. The image symbols include golden tortoises, ignots, sail ships and eagles. The background color is a darkish red, which is believed to be lucky in China. The game has a lucky Fu Bat symbol (I had to read up about this one), which acts as a Wild and a Jackpot symbol. But what is Fú Bat?

"fú is the character for good fortune and luck. The five bats found in the design represent the five lucky gods and the five blessings: long life, wealth, health, virtue and peaceful death. "

Those that have played 88 Fortunes in a land-based casino will know that the game looks a little different to the online version. In the cabinet version, most of the jackpot information is contained in a separate top screen, away from the reels. Unfortunately, when playing online, you don’t get the luxury of all that extra real estate, so everything is crammed into one screen. For me this feels crowded and takes a little time to get used to.

When one or more Fu Bat symbols land on the reels, a bunch of gold coins will be transported up to a golden jackpot pot at the top of the screen. At any point this may trigger the jackpot feature (only available in real money). This is where the number of gold symbols or credits you have been playing comes into play. The larger your credits the better chance you have of winning a jackpot. If you are successful in getting a chance to play for a jackpot then you will be whisked off to another screen to choose from 12 coins. Each coin has a symbol behind it and if you match 3 you will be eligible for a jackpot prize.

Bang the Gong for Free Spins

Land 3 or more Gong scatters from the left most reel and you will trigger 10 Free Spins. All card symbols (9,10,J,Q,K,A) will change to 5 major value symbols during the feature, increasing the chances of some big wins.

Just because a slot game is hugely popular in land-based casinos, does not always work as well online. The overcrowded screen makes the game confusing, especially when you first lay eyes on it. One thing I do know is that the overwhelming focus on luck in symbology found in slot games makes for very repetitive designs and features in Chinese-themed slots. Unfortunately 88 Fortunes is no exception.There are some nice features in 88 Fortunes and the chance of winning a jackpot always makes the game a little more exciting. If Chinese-themed slots are your thing then you should go checkout  Aristocrats slot 50 Dragons or Microgaming’s Lucky Koi. 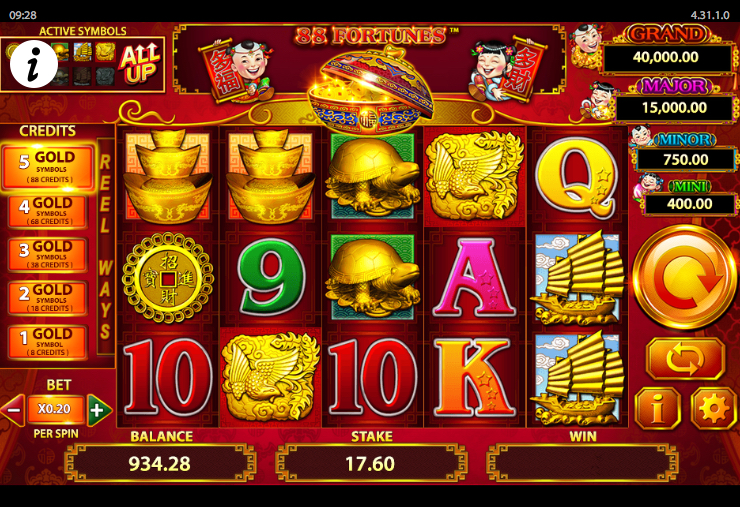