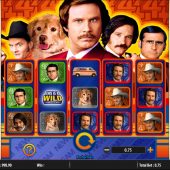 Anchorman The Legend of Ron Burgundy slot is themed upon the 2004 American movie of the same name, a comedy spoof about the 'action news' TV shows of the 1970's. Hapless Ron, played by Will Ferrell, works with old school friends who are reporters, weathermen and producers so everything that can go wrong usually does! We hear the corny musical overlay from the film during play and various sound effects plus brief clips before the many random feature the game offers. Since Bally's incorporation into the Scientific Gaming group their games have lost their original simpler format and complex themed slots are becoming more common as we've already seen with Titanic, Wonder Woman Gold and Pawn Stars. Maybe that's not a bad thing, but will Ron Burgundy's epic fails spread to your bankroll too?

Initially it looks simple enough with 25 paying lines and a standard 5x3 grid overlaid on the cast from the film and naturally including characters and objects from it. You need to pay 75 coins per spin though and symbols appear in singles or pairs on each reel including the Wilds. The top pay is only 200 coins though 5-of-a-kind of Ron Burgundy and 150 for the other 3 characters, the remainder like the Dog, Van, Sunglasses and Stetson only pay 70 or 30 coins. This is due to the frequent random event which you will recognize by a film clip appearing over the screen. You will then get one of the following for that spin:

Mystery Stack reels - stacks of mystery symbols appear on all reels and can reveal all icons bar the scatter after landing.

Ron reels - for one spin, all symbols disappear bar the Wild, Ron, Dog, Glass and Stetson.

So, we arrive at the main feature offered by Ron and his friends at KVWN. Three bonus scatters on the centre 3 reels which begin a movie clip and then take you to a giant bonus spinner. Rather disappointingly you may land on any one of three pathetic cash awards, the best being less than 14x bet! You do have three internal jackpot awards of 25.00, 100.00 or 1000.00 though but what we really want are one of the four actual bonus rounds available.

Ron's Giant free games - 6 free spins with giant reels of 19-rows each and 117 pay lines. The reels are different here with more Ron on them and no retrigger, similar to the Colossal Reels format on WMS' Kiss slot. You do get to listen to Hot Chocolate's 'Everyone's A Winner Baby' during this round as all 6 spins win - poorly.

Brick's Weather wheels - a spin on the blue wheel awards 1-14x. You may level up if your cash amount is green to another wheel. This one can award 3-28x. If on this green wheel your cash award is red, you then get a final spin on a red wheel for a multiplier of 2-10x on total collected.

Sex Panther pick - 15 bottles displayed, and 3 picks will each give you 0.25 ot 1.25x bet. Extra picks are possible. You the pick a multiplier of 2-10x for the total collected.

Anchorman The Legend of Ron Burgundy slot looks good, sounds good and is full of features along with a decent 96.03% RTP. That's pretty much where the compliments end because the volatility and wins are pathetically low for most players. True, this will maintain your balance and give you playtime, but what's the point if you'll never win enough to leave the game? Random in-play features are frequent but the old disappointment that developers STILL insist on incorporating into their games i.e. the lack of guaranteed features for 3 scatters (think Microgaming's Tarzan) is present here unfortunately. On top of that, when you do hit a bonus round the returns are frankly dreadful. Ron Burgundy may have a Bally badge, but I think WMS are pulling his strings here...