Rainbow Riches Megaways, developed by Barcrest is a slot with cascading reels and 324-117,649 ways to win. 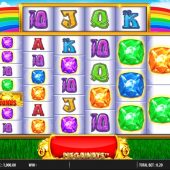 Rainbow Riches Megaways slot, I suppose, was inevitable as Barcrest are now in the Scientific Gaming/WMS fold, as are the creators of the famous mechanic, Big Time Gaming. There are many versions of this original B3 UK Amusement Arcade classic with the irritating Leprechaun, although mercifully, he doesn't seem to appear here! You have the original Rainbow Riches, plus the Drops of Gold and Pick 'n' Mix versions, and here we retain the green countryside background and some of the sounds. However, the leprechaun's giggle at the beginning of each spin has been replaced by a barking dog in the background for some strange reason. So can the pot of gold at the end of the rainbow here become a mega one for our bankroll?

Rainbow Riches Megaways slot has the same format as Bonanza with a scrolling reel above the centre 4 reels and varying rows of 2-7 tiles, giving us 324-117,649 ways to win each game. Symbols appear stacked and singly, with Wilds only appearing on the scrolling reel and winning symbols are replaced by more cascading from above until wins stop appearing. The 6-of-a-kind wins are Diamonds 50x bet, Yellow Gem 5x, Purple 3x, Green 1.5x and Blue 1.2x with five card values of 1.2 down to 0.8x. Your scatter is the Gold Pot on all reels, of which you need 4 or more for 12 free games, with 5 spins extra for each one over the 4.

There is one random modifier where a Rainbow Gem can appear on the scrolling reel, which turns all gems in the window to one the same colour, hopefully, the Diamonds!

The Wild symbol in Rainbow Riches Megaways will act as a substitute for any other symbol apart from the Scatter symbol.

You have a feature buy here of 100x bet, but you can reduce the price by banking all wins to reduce the price (you won't get paid them into your balance) or selecting to bank just the small wins of 3x bet or less, which again come off the 100x cost.

Whichever, you begin the free spins at 1x multiplier, and the familiar Bonanza-style increasing multiplier comes into effect for any winning action. You cannot retrigger, but you can see +1, +2 or +3 Gold Pots on the top reel for extra spins. You may still see the Rainbow Gem in the free games.

You receive the free spins bonus at least four Pot symbols are in view on the main reels when a spin has finished. Keep an eye out for the super gem bonus, if it appears in the top row, the gems will morph into an identical symbol and another bonus arrives.

Rainbow Riches Megaways slot is a decent enough game with a 95.90% RTP, although this increases marginally if you choose to use the feature buy all the while, which I wouldn't recommend! The game is less irritating than some versions of the theme and, to be fair, is kind on the eye and ear, plus the Rainbow Gem can hit you with a surprisingly high win in the base game when appearing, which is rare. As with this particular maths model, free games are hard to triggers, and you need 400+ spins on average, but the base game does sustain you quite well. It's worth a go, but I think Barcrest are a little late to the party with this game as there's no reason to choose it over any other similar Megaways model...

Make sure you checkout the free online demo.